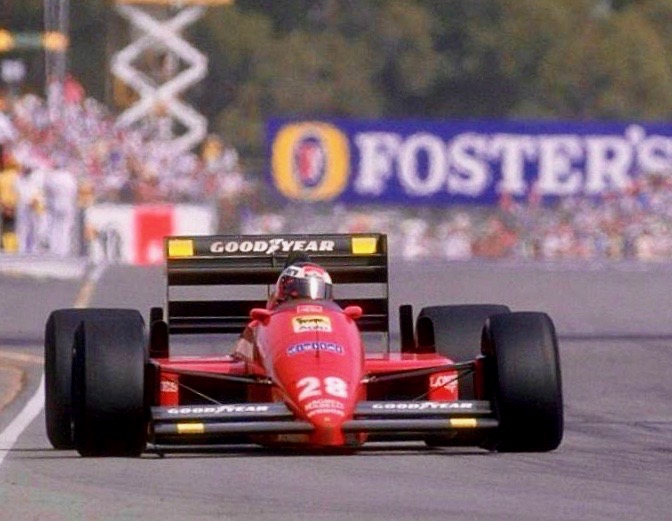 Scuderia Ferrari were always going to be a crowd favourite in Adelaide given the large expat Italian community within South Australia, but the arrival of Formula 1 to Australia coincided with a baron patch for the legendary manufacturer.

For 21 years Ferrari went without a Formula 1’s world drivers’ championship, the longest drought in the history of the team.

Though Ferrari were quick to follow Renault’s footsteps in developing turbocharged engines in the late 1970s, it soon fell behind the TAG Porsche and BMW powerplants that won titles ahead of the pioneers of the technology.

Ferrari’s Michele Alboreto finished in second place in the 1985 drivers’ championship, although well behind title winner Alain Prost. The rise of Honda left Ferrari falling down the pecking order with Stefan Johansson recording fifth and third places in Adelaide in 1985 and 1986 respectively.

Honda scored its first world championship win with Williams in 1987 before moving to McLaren in 1988. And it was at the end of the 1987 when Ferrari finally looked to have found its stride with Gerhard Berger winning the final two races of the season in Japan and Adelaide.

Ferrari was further rewarded when, in mid-evening on the Sunday in Adelaide, Ayrton Senna’s Lotus was disqualified for running over-sized brake ducts, promoting Alboreto to second place behind Berger.

As fate would have it, the 1987 Australian Grand Prix would be the final win witnessed by founder Enzo Ferrari. The reclusive ‘Commendatore’ never travelled to Adelaide but watched on from his Maranello home. His congratulations were passed on to Berger.

The back-to-back wins suggested the scarlet red cars would be in championship contention in 1988, but the McLaren Honda combination steamrolled the opposition with the only other winner that season Berger for Ferrari in Italy.

Nigel Mansell replaced Alboreto at Ferrari in 1989, though a double retirement in wet conditions in Adelaide typified a frustrating season marred by a fiery crash for Berger at San Marino.

Berger moved to McLaren in 1990 to make way for the incoming Prost, who left McLaren following the deterioration of his relationship with Senna. Prost took the title fight to Senna with a strong middle of the season that included three wins in a row, though Ferrari’s bid to end its title drought went up in a cloud of dust off the start in Japan.

Senna and Prost’s second championship-deciding collision was the result of Senna’s anger at being robbed of the title the season before. The failure for Ferrari would prove costly as it lagged behind the championship-winning McLaren Honda and Renault, now teamed with Williams.

Mansell left for Williams in 1991 with Ferrari snatching Frencham Jean Alesi from the English team’s grasp, but his countryman Prost didn’t see out the 1991 season. Prost compared the under-performing Ferrari to a truck and was sacked heading to Adelaide, with test driver Gianni Morbidelli moved across from Minardi for the race. His sixth place in the rain-shortened race meant his first point-scoring result in Formula 1 was rewarded with half a point.

Ferrari slipped further off the pace in 1992 with Alesi joined by Italian Ivan Capelli, though Ferrari headed to Adelaide for the second consecutive season having sacked a driver with the under-performing Capelli replaced by test driver Nicola Larini.

Berger returned for his second stint at Ferrari in 1993, though another winless season followed and ended with McLaren surpassing Ferrari’s tally of most wins in Formula 1. Senna won McLaren’s 104th race in Adelaide with the Ferraris embarrassingly lapped in fourth and fifth place.

Ferrari broke its winless run with Berger taking victory in Germany in 1994, but it was Benetton and Williams fighting for the championship in Adelaide where Berger scored second place.

Alesi won his first grand prix in Canada in 1995, though he and Berger ended their Ferrari careers with retirements in Adelaide. Ferrari team boss Jean Todt had been plotting the team’s revival, led by the recruitment of Benetton’s two-time world champion Michael Schumacher.

In Adelaide in 1995, Jackie Stewart predicted the success that would follow for Ferrari and the eventual end of its title drought: