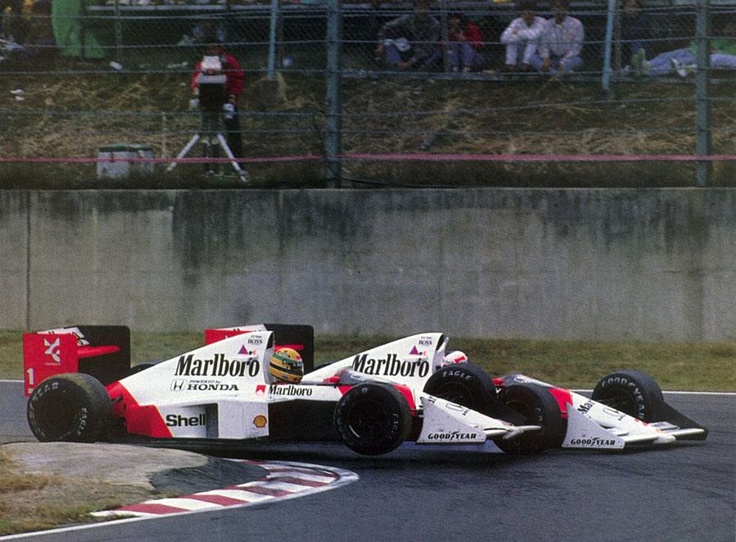 The Japanese and Australian grands prix were paired together as the concluding two rounds of the Formula 1 season from 1987 to 1995. And for five straight seasons, Suzuka played host to dramatic championship-deciding events.

Here’s a rundown of the Suzuka drama and its impact on Adelaide:

1987: Nelson Piquet led Williams teammate Nigel Mansell heading into Suzuka. Mansell needed to beat Piquet to keep the title fight alive to Adelaide for a second consecutive season. But Mansell’s charge ended in Friday’s qualifying session when he ran wide through the series of Esses in the first sector of the circuit. Onto the dirt and dust, he lost control of his Williams and crashed back-first into the wall. The rearward impact and harsh landing aggravated a previous back injury.

Mansell missed the race in Suzuka and Adelaide, handing the title to Piquet. Riccardo Patrese replaced Mansell at Williams for Adelaide, while Stefano Modena made his Formula 1 debut in place of Patrese at Brabham.

1988: The McLaren Honda team of Ayrton Senna and Alain Prost dominated the 1988 season, winning all but one grand prix.

Senna would seal his first world championship win with victory in Suzuka. And the Brazilian overcame a slow start that dropped him to the mid-pack to win in mixed conditions. Prost won in Adelaide and would end the season with more points than Senna. But with only the best 11 results counted towards the championship, Senna’s better tally of wins would trump Prost’s consistency.

1989: Prost had the points advantage in the second Suzuka showdown with Senna. Prost led Senna in the closing stages of the race, but Senna was closing in knowing he needed the win given his points deficit. On lap 46 with seven to go, Senna dived on the inside of Prost at the circuit’s tight chicane. Prost emphatically shut the door and both McLarens came to a stop.

While Prost climbed out of his McLaren knowing retirement for both of them would hand him the championship, Senna frantically sort a push from marshals and restarted through the escape road of the chicane. Senna, after a quick repair for a damaged nosecone, clawed back the time lost and regained the lead from Benetton’s Alessandro Nannini to cross the line first. But having shortcut the chicane he was later disqualified for the infringement in a ruling that gave Prost the world championship.

Senna arrived in Adelaide and faced the media, fighting back tears as he argued his case on the injustice of the penalty in a 90-minute press conference. FISA president Jean-Marie Balestre’s heavy-handed involvement in the proceedings in addition to his close relationship with countryman Prost didn’t go unnoticed. And Senna’s contention was clear: the governing body was manipulating the results of the world championship.

1990: Senna and Prost had been split with Prost’s move to Ferrari in 1990. But the duo again faced off in Suzuka with the championship on the line, though this time it was Prost that needed to beat Senna to keep the title battle alive to Adelaide. Sure enough, the duo collided yet again, this time at the very first corner. Senna had pole position, though he argued that Prost was on the advantageous side of the track in second place.

As Prost took lead off the start and the normal racing line into turn one, Senna went for the diminishing gap on the inside and rammed into the rear of the Ferrari. The duo were out on the spot, handing Senna the championship win and, as he’d later admit, revenge for 1989.

Prost and Senna were at the centre of attention in Adelaide yet again. A safety commission had been established to investigate the spate of accidents in recent seasons, with the blame for the 1990 Suzuka spate attributed to Senna.

Prost refused to speak to the media about the accident in Suzuka, was fined for walking out of the driver’s briefing and wasn’t part of the end-of-season and former world champions’ photo sessions as part of the 500th grand prix celebrations.

While Prost was avoiding the media, Senna was causing a stir by proclaiming his innocence. He and former world champion Jackie Stewart had a heated discussion in an interview on Channel Nine, with Stewart questioning Senna’s driving standards in Suzuka and in other incidents.

1991: Williams Renault took the fight to McLaren in 1991, led by the returning Mansell who needed a win at Suzuka to take the championship battle against Senna to Adelaide. Mansell’s campaign ended, though, with spin early in the Suzuka race to hand Senna his third championship win.

The drama in Adelaide was reserved for Prost, missing from the title fight for the first time since 1987. Frustrated by the performance of his Ferrari, he was sacked by the team for criticising the car.

The 1992, 1993 and 1995 championships were decided before Suzuka, while a wet Japanese Grand Prix in 1994 set up Adelaide’s own dramatic championship decider that season.