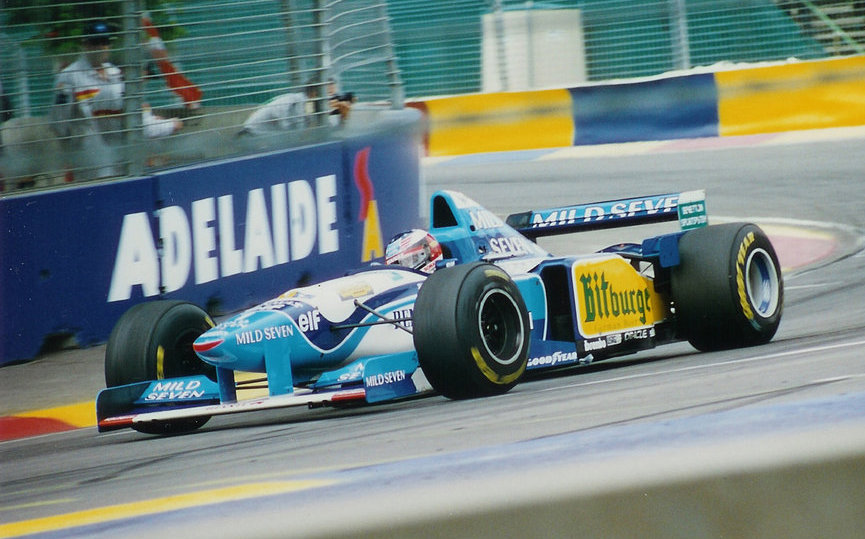 If we were to compare teams from the Adelaide Grand Prix era to today, then Benetton would be the Red Bull Racing of the day.

Both brands used innovative marketing techniques in their respective industries; they started out in Formula 1 as sponsors of middle-ranked teams before buying out a British-based outfit; and they went on to win world championships with German drivers within a decade.

Benetton appeared at the first Adelaide Grand Prix as sponsors of the Alfa Romeo and Toleman teams, purchasing the latter in time for the 1986 season.

The investment from Benetton paid immediate dividends, from being non-classified in the championship standings in 1985 to sixth place in the standings and race winners in 1986.

The B186 was powered by the BMW M12/13, a turbocharged 1.5-litre inline four-cylinder engine that produced 1350-plus horsepower in qualifying trim. The B186 recorded pole positions at power circuits at Zeltweg in Austria and Monza in Italy with Gerhard Berger scoring Benetton’s first win in Mexico.

Berger left for Ferrari and Benetton switched to Ford Cosworth power in 1987. Thierry Boutsen replaced Berger and claimed his first podium for the team with third place in Adelaide, as Benetton improved to fifth place in the championship standings.

Boutsen was teamed with Alessandro Nannini in 1988 with the duo recording seven podiums for third place in the championship standings, the best-placed non-turbo entrants.

Benetton dropped to fourth in the standings in 1989, though Nannini recorded his one and only win in Formula 1 in Japan as a result of the disqualification of Ayrton Senna following his collision with Alain Prost.

Flavio Briatore, a director for Benetton’s clothing operation, was appointed as the team’s manager from 1990 with three-time world champion Nelson Piquet signing from Lotus.

Piquet finished the 1990 season with back-to-back wins in Japan and Adelaide, elevating Benetton to third in the standings. Piquet led home teammate Roberto Moreno in a one-two finish in Japan, an emotional result for the team following a career-ending helicopter crash for Nannini.

Benetton signalled its intent in 1991 with the recruitment of Tom Walkinshaw as engineering director and Ross Brawn as technical director. And following a sensational debut for Jordan in Belgium, Benetton controversially signed German driver Michael Schumacher to a multi-year deal from the following race in Italy. Piquet retired from Formula 1 with fourth place in the rain-shortened 1991 Adelaide Grand Prix, with the team building around Schumacher from 1992.

The German scored another win in Portugal in 1993, finishing on the podium in all nine races he finished over the course of the season for fourth place in the drivers’ championship. Teammate Riccardo Patrese added two podiums in his final season in Formula 1.

Benetton stepped up as championship contenders in 1994 in a season marred by tragedy and controversy. The death of Senna in his third race for Williams left Schumacher as the championship favourite, having won the opening four races of the season.

Speculation over the legality of the B194, disqualification in Britain and Belgium and a two-race ban allowed Williams’ Damon Hill to close the gap in the championship race, setting up a championship-deciding showdown in Adelaide.

Schumacher and Hill led the way in Adelaide until lap 36. Schumacher ran wide on East Terrace and brushed the wall. Hill dived to the inside ahead of the next corner and the two collided. Schumacher’s Benetton ran off into the tyre barrier and retired on the spot, while Hill crawled back to the pits with suspension damage. With both drivers out, Schumacher won the title by one point and became the first German driver to win a Formula 1 world championship.

Schumacher ended his Benetton career in Adelaide in 1995 before moving to Ferrari, where he would go on to win further world championships with the likes of Brawn and other key staff joining him from Benetton.

Benetton would sell to Renault in 2001, ending a 15-year spell in Formula 1 that proved non-automotive brands could succeed with the right personnel.