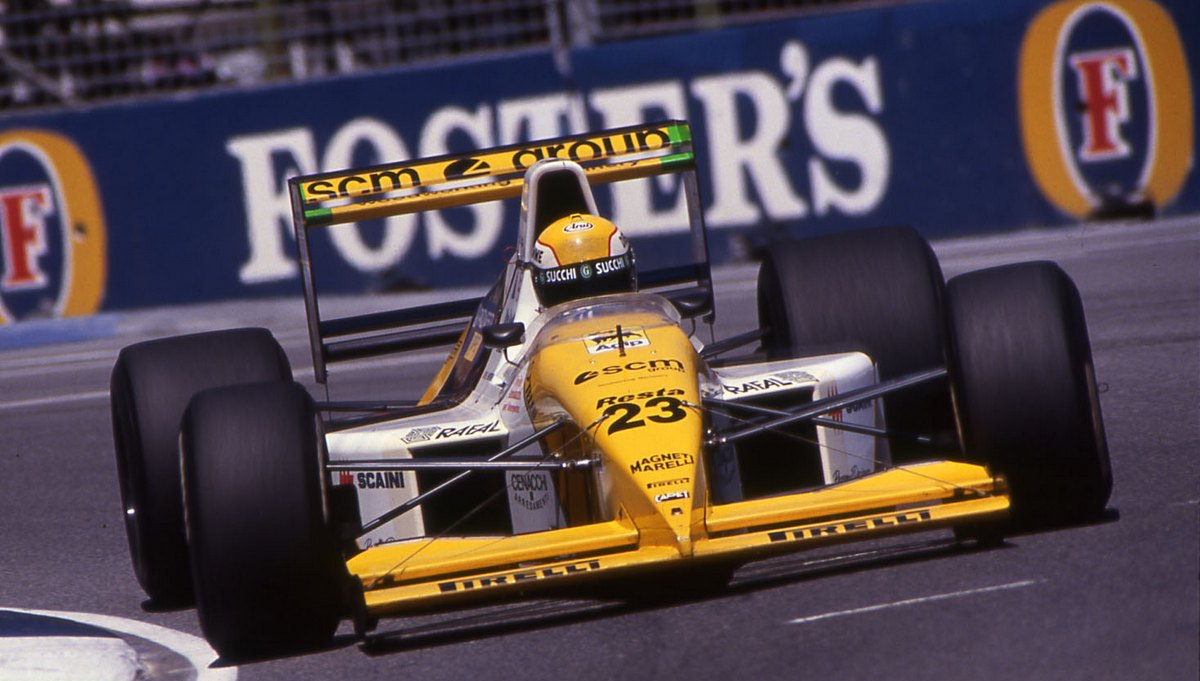 Italian team Minardi debuted in the same season as the Adelaide Grand Prix in 1985 and came to represent the battler spirit that existed in Formula 1 in that period.

Based in the town of Faenza, where the Minardi family owned a Fiat dealership from the 1920s, Giancarlo Minardi ran customer cars in Formula 2 before becoming a constructor of his own cars from 1980.

Despite just one race win in Formula 2, Minardi stepped up into Formula 1 with a single car powered by the Motori Moderni turbo engine for Italian Pierluigi Martini in 1985. It was a tough initiation for the team with a season’s best of eighth place in Adelaide.

Minardi expanded to two cars from 1986 and gave Alessandro Nannini his Formula 1 debut, though the Motori Moderni engines were underpowered and unreliable. The team failed to score a point in its first three seasons in Formula 1 with the switch to normally-aspirated engines from 1989 giving the likes of Minardi a new lease of life.

Minardi ran Ford DFR 3.5-litre V8s from 1988, a season in which Martini returned to the team and scored its first point in the United States Grand Prix in Detroit.

A switch to Pirelli tyres paid dividends in 1989 with four points scoring finishes, including sixth place for Martini at a very wet Adelaide Grand Prix. Martini had qualified in third place for that race, taking advantage of Pirelli’s qualifying tyres in the dry conditions, though the rain on race day saw Martini hanging on for the final place in the points.

Pirelli’s qualifying tyres helped Martini score Minardi’s only front-row start at the 1990 USA Grand Prix in Phoenix, though the team failed to score a point across the season.

Minardi switched to Ferrari V12 engines in 1991 with Martini claiming a pair of fourth places in San Marino and Portugal for seventh in the constructors’ championship, the team’s best-ever result.

Further engine changes to Lamborghini and Ford in 1992 and 1993 respectively netted five points’ scoring finishes across the two seasons. But the costs associated with the rise of electronic driver aids and the downturn in the global economy hit small teams such as Minardi hard.

Investors from the Scuderia Italia team moved across to keep Minardi afloat in 1994. Michele Alboreto, who won for Minardi in Formula 2, joined for his final season in Formula 1 alongside Martini, in his third spell with the team.

Benetton team boss Flavio Briatore purchased a share of Minardi in 1995, a season in which Pedro Lamy scored the team’s only point of the season with sixth place in Adelaide.

But as the professionalism of Formula 1 stepped up, with the arrival of new manufacturers and the growing gap between the haves and have nots, Minardi struggled to keep pace with just one point scored from 1996 to the end of 2001.

Giancarlo Minardi sold the team to Australian businessman Paul Stoddart in 2001. Stoddart kept the team in Faenza and retained the Minardi name.

Stoddart sold the team to Red Bull from 2006 on the condition the new owners would retain its base in Faenza. Red Bull turned Minardi into Scuderia Toro Rosso (Italian for Red Bull), doubling its presence in Formula 1 with a team that could develop its young drivers.

Among the drivers who earned promotion to Red Bull Racing from Toro Rosso were Sebastian Vettel, who scored an emotional race win for Toro Rosso on home soil at the 2008 Italian Grand Prix, and Australian Daniel Ricciardo.