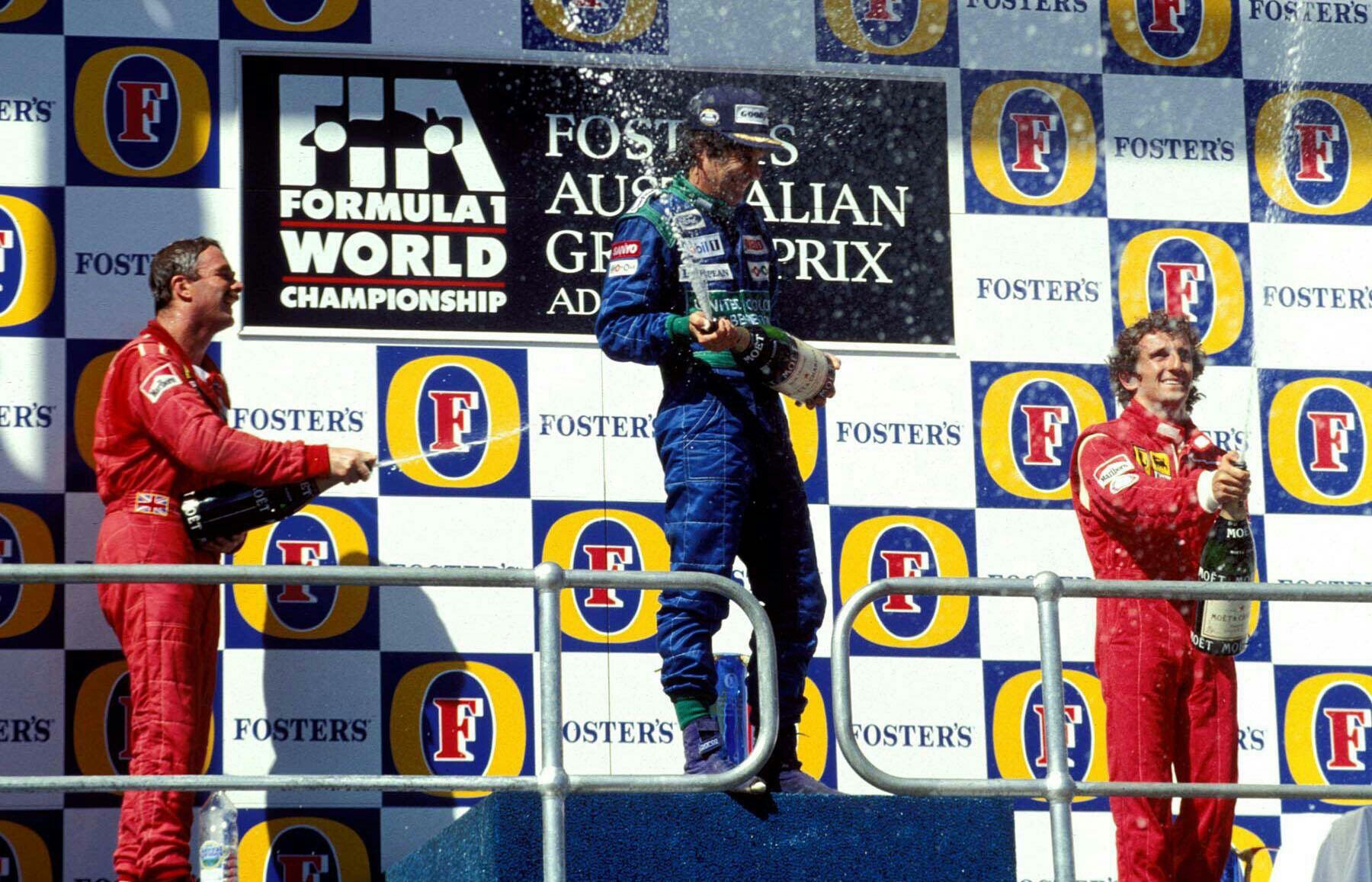 Over 20 years since the last Adelaide Grand Prix in 1995, let’s take a look at what the race winners of the event have been to since:

Rosberg’s win in Adelaide in 1985 would be his last, retiring from Formula 1 at the end of the following season.

After two years away from racing, Rosberg turned his attentions to sportscars within Peugeot’s Le Mans line-up followed by a switch to German touring cars (DTM) with Mercedes-Benz and Opel. Rosberg also founded Team Rosberg, which continues to this day in the DTM and also run entries in Formula 3 and sportscars. He retired from driving in the DTM at the end of 1995 to focus on running the team.

Rosberg also guided young Finnish talent such as JJ Lehto and Mika Häkkinen into Formula 1, the latter following in the footsteps of his manager to become a world champion.

Rosberg assisted in the early stages of son Nico Rosberg’s career, though took a step back and watched as the second-generation racer won the 2016 Formula 1 world championship. It wasn’t until the celebrations had begun that Rosberg emerged from the shadows to celebrate with his son, in keeping with his tendency to shy away from the spotlight.

Prost retired from Formula 1 once and for all following the 1993 Adelaide Grand Prix but remained in the sport, first as a television analyst in France and ambassador for Renault before becoming a team owner.

Prost purchased the Ligier team and renamed it Prost Grand Prix ahead of the 1997 season. The team achieved solid results in its first season, though its early momentum came to crushing end when lead driver Oliver Panis broke his leg in an accident in Canada.

Prost Grand Prix teamed with Peugeot from 1998, however the package proved uncompetitive and even a switch to Ferrari engines in 2001 couldn’t arrest the decline. The team folded before the start of the 2002 season.

Prost reunited with Renault as team boss of the manufacturer’s Formula E team, for whom son Nicolas Prost races, and was appointed as a special adviser to Renault’s Formula 1 team in 2017. Aside from his Renault commitments, Prost is an avid cyclist with his racing post-Formula 1 limited to the Andros Trophy ice-racing series.

Berger was the only driver to race in every Adelaide Grand Prix from 1985 to 1995, eventually retiring from Formula 1 at the end of the 1997 season.

Berger ran the trucking company founded by his father, Berger Logistik, before returning to the Formula 1 paddock as a director for BMW upon its grand prix return in 2000 to 2003.

His close ties to Red Bull (Berger was the first Formula driver backed by the energy-drink producer) saw him become an investor in Scuderia Toro Rosso in 2006, in a deal that included Red Bull boss Dietrich Mateschitz investing in Berger Logistik, though Berger sold his shares in the team back to Mateschitz in 2008.

Berger was president of the FIA Single Seat Commission from 2012 and 2014 and is currently chairman of the German touring-car series, DTM.

Boutsen competed in his final grand prix on home soil in Belgium in 1993, though he would race on in a variety of categories over the coming years.

He spent three years racing a Ford Mondeo in German touring cars from 1994 to 1996, though it was in sportscars where he enjoyed more success with two second places at the Le Mans 24 Hours in 1993 and 1996.

Boutsen raced on until 1999, when a heavy accident at Le Mans prompted his decision to retire from motorsport.

Piquet spent one more season in Formula 1 following victory in Adelaide in 1990 before setting his sights on the Indianapolis 500. It was in practice for the 1992 Indy 500 when he slammed head first into the wall and suffered serious foot and ankle injuries. Piquet recovered to qualify for the 1993 Indy 500, though failed to finish due to engine troubles.

Piquet subsequently walked away from open-wheel racing and competed in a McLaren at the 1996 and 1997 Le Mans 24 Hours and winning Brazil’s Mil Milhas sportscar race in 1997 and 2006, the latter his final competitive event.

By this time Piquet’s attention had switched to helping son Nelson Piquet Junior’s career with Piquet Sports founded in 2000, winning Sudamericana and British Formula 3 titles with Piquet Junior and finishing runners-up in GP2 in 2006.

Piquet Sports wound down with Piquet Junior joining Renault in Formula 1 in 2008 and 2009, though he struggled for results with his reputation tarnished by his admission that he had crashed deliberately at the request of team management to help teammate Fernando Alonso win in Singapore in 2008. Piquet Junior did win a world title in Formula E, while brother Pedro won the Brazilian Formula 3 championship in 2014 and 2015 before moving to race in Europe.

As for Piquet himself, he lives in Brasilia running various businesses with his 1987 championship-winning Williams FW11B on display in his home.

Sadly, we can only speculate on what could’ve been for Senna following his death at the 1994 San Marino Grand Prix. The three-time champion scored his 41st and final grand prix win in Adelaide in 1993 in his final race for McLaren before a move to Williams.

Had he lived, it seems likely Senna would have added to his world championship tally considering the competitiveness of the Williams Renault package over the coming seasons. Some have speculated that Senna could’ve ended his career at Ferrari, perhaps leading the Italian team’s return to the front of the grid as Michael Schumacher would eventually do.

Beyond Formula 1, Senna would undoubtedly have been an imposing figure in Brazilian politics. The Instituto Ayrton Senna was founded in 1994 by the Senna family to help underprivileged children in Brazil.

Mansell’s victory in Adelaide in 1994, as a substitute at Williams, inspired a full-time return to Formula 1 at McLaren in 1995, though he only took part in two races that season. Another return with Jordan in 1997 was aborted, as Mansell switched his focus to touring cars. He raced a Ford Mondeo in the British Touring Car Championship in 1998, but it wouldn’t lead to a permanent drive.

Mansell invested in and raced in the short-lived Grand Prix Masters series, which pitted former Formula 1 stars in high-powered open-wheelers, and made sporadic starts in various sportscars races. This included at the 2010 Le Mans 24 Hours alongside sons Leo and Greg Mansell.

Mansell has been on the stewards’ panel at various Formula 1 races and recently released an autobiography.

Hill’s dominant win in Adelaide in 1995 set the tone for his long-awaited championship victory in 1996. Following spells with Arrows and Jordan, Hill retired from Formula 1 at the end of 1999.

Unlike many other drivers, Hill didn’t race on in other categories. Aside from demonstrations and tests, he only ever raced in a VW Scirocco R-Cup charity event.

Hill ran car dealerships and other endeavours and returned to motorsport with a stint as president of the British Racing Drivers’ Club (BRDC) from 2006 to 2011. He returned to the Formula 1 paddock from 2012 as an expert commentator for Sky Sports F1 and also wrote an autobiography.