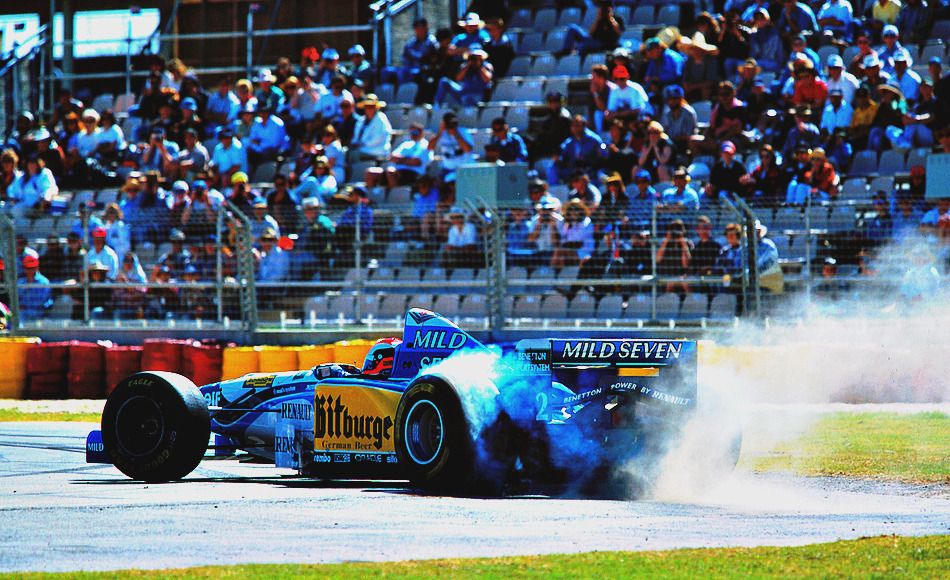 The final Adelaide Grand Prix in 1995 turned into a battle of survival with just eight finishes from 24 entrants.

McLaren’s Mika Hakkinen was ruled out of the race following his Friday qualifying crash, suffering a fracture to the base of his skull and saved by the fast reactions of doctors.

With Hakkinen missing, the field was down to 23 entries. And with Luca Badoer’s Minardi failing to start on the warmup lap, just 22 entries would start the race.

Sauber’s Karl Wendlinger crashed head-first into the wall at the Senna Chicane in Friday practice. He suffered whiplash that forced him to miss qualifying and retire just eight laps into the race in pain.

The craziness in the race began when Williams’ David Coulthard crashed on the entry into the pitlane on lap 20.

Forti’s Roberto Moreno also spun coming into pitlane, unlike Coulthard going into the wall with the rear of his car but with the same result – retirement.

Ferrari’s Jean Alesi and Benetton’s Michael Schumacher, who were set to swap seats in 1996, made contact at the hairpin at the end of Brabham Straight on lap 23, subsequently retiring due to the damage sustained in the tangle.

Drivers were falling by the wayside at an alarming rate: Rubens Barrichello crashed on the entry to the parklands section with a sticking throttle; Gerhard Berger, the only former winner in Adelaide in the field, out with engine failure; Heinz-Harald Frenzten with gearbox failure; Eddie Irvine, celebrating his 30th birthday, losing oil pressure; and Johnny Herbert out with a broken driveshaft.

Williams’ Damon Hill cruised to victory with a two-lap gap over second place, the biggest winning margin since Jackie Stewart at the 1969 Spanish Grand Prix.

“It seemed like everything went my way,” said Hill. “I had quite an easy time of it. A surfer I met before the race taught me the phrase, ‘Too easy, mate’. And it sums up this race.”

Best of the rest was Ligier’s Oliver Panis, despite a spluttering and smoking Mugen-Honda engine. Panis brought his ailing Ligier home for an unlikely second place with Footwork’s Gianni Morbidelli scoring his first and, ultimately, only podium in Formula 1.

McLaren’s Mark Blundell overcame a hit up the rear from fellow Brit Martin Brundle to take fourth place. Tyrrell’s Mika Salo scored fifth place with Pedro Lamy claiming Minardi’s first point of the season in sixth, despite an embarrassing lapse of concentration earlier in the race when he spun at turn three and made a mess of his re-entry, spinning again.

Only eight of the 22 entries that started the race took the chequered flag. For the Forti and Pacific teams in seventh and eighth, the failure to score a point in such a race of attrition would prove costly with the loss of financial support for the following season.

Even support-category racers weren’t sparred in an incident-filled weekend. Formula Ford racer Gavin Monaghan required emergency surgery on a broken leg after being struck by another car head-on, while Formula Holden competitor Alan Galloway suffered a bruised foot and was left unconscious by another heavy front-on impact.

In the grand prix itself, two Minardi mechanics suffered minor injuries when struck by the Tyrrell of Ukyo Katayama. Even a friendly game of soccer between Italian teams Ferrari and Forti resulted in mechanic for the latter Loreto San Fratello breaking his right ankle.