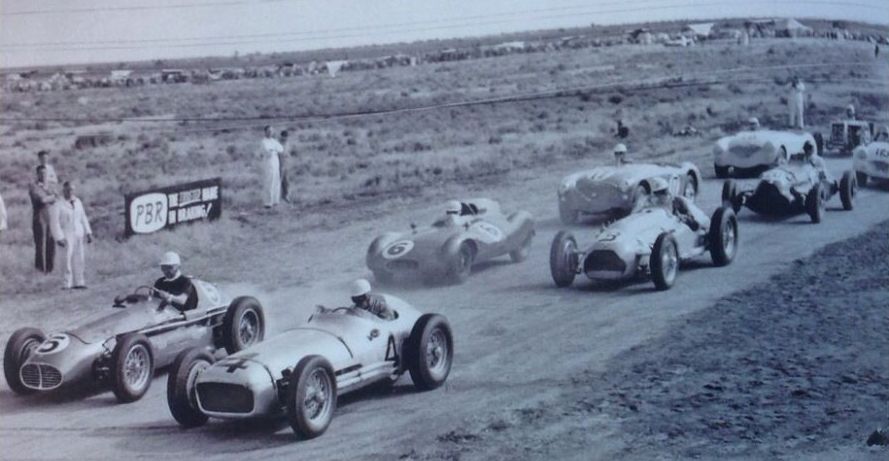 These are those five circuits:

The first road race held for cars in South Australia was organised by the Sporting Car Club of South Australia. It marked the first Australian Grand Prix to be held away from Phillip Island in Victoria. The circuit ran on public roads between Victor Harbor and Port Elliot, beachside towns 80 kilometres south of Adelaide. It was the only time the circuit was used for a grand prix, celebrating the centenary of European settlement in South Australia. A plaque recognises the event on Adelaide Road, at the Lions Information Bay, in Victor Harbor.

CLICK HERE for more on the Port Elliot-Victor Harbor Circuit.

The Barossa Valley township of Nuriootpa held the grand prix on a rectangular-shaped temporary circuit. The road course was first used in 1949 and held the grand prix in 1950. The Nuriootpa Road Circuit was a temporary solution for a motorsport venue in South Australia, in place of Lobethal. However, a spate of crashes off the back serious accidents at Lobethal led to a ban on racing on public roads in South Australia through legislation that would remain until 1985.

The ban on racing on public roads led to the creation of the first purpose-built motorsport facility in Australia at Port Wakefield, 98 kilometres north-west of Adelaide. The circuit was fast, featuring a long back straight, though was relatively short at just over two kilometres. It was built in 1953 ahead of hosting the grand prix in 1955 (pictured above), though it was considered inadequate to host further events with its infrastructure moved to the new circuit being built at Mallala. Port Wakefield Circuit closed soon after with the track layout still visible on Google Maps and a sign in the town recognising the event.

South Australia’s second purpose-built motorsport facility opened in 1961 in time to host that year’s Australian Grand Prix. It was built on the site of the former RAAF base in Mallala, 55 kilometres north of Adelaide, utilising infrastructure from Port Wakefield Circuit. The original lap distance of 3.38 kilometres was reduced to 2.6 kilometres following the grand prix, removing the north-eastern leg of the circuit. Mallala Motor Sport Park became the hub of South Australian motorsport, hosting various categories including the Australian Touring Car Championship until 1998 ahead of the debut of the Adelaide 500 in 1999. Mallala Motor Sport Park continues to this day, hosting various grassroots events and is now owned by the Peregrine Corporation, builders of The Bend Motorsport Park in Tailem Bend.