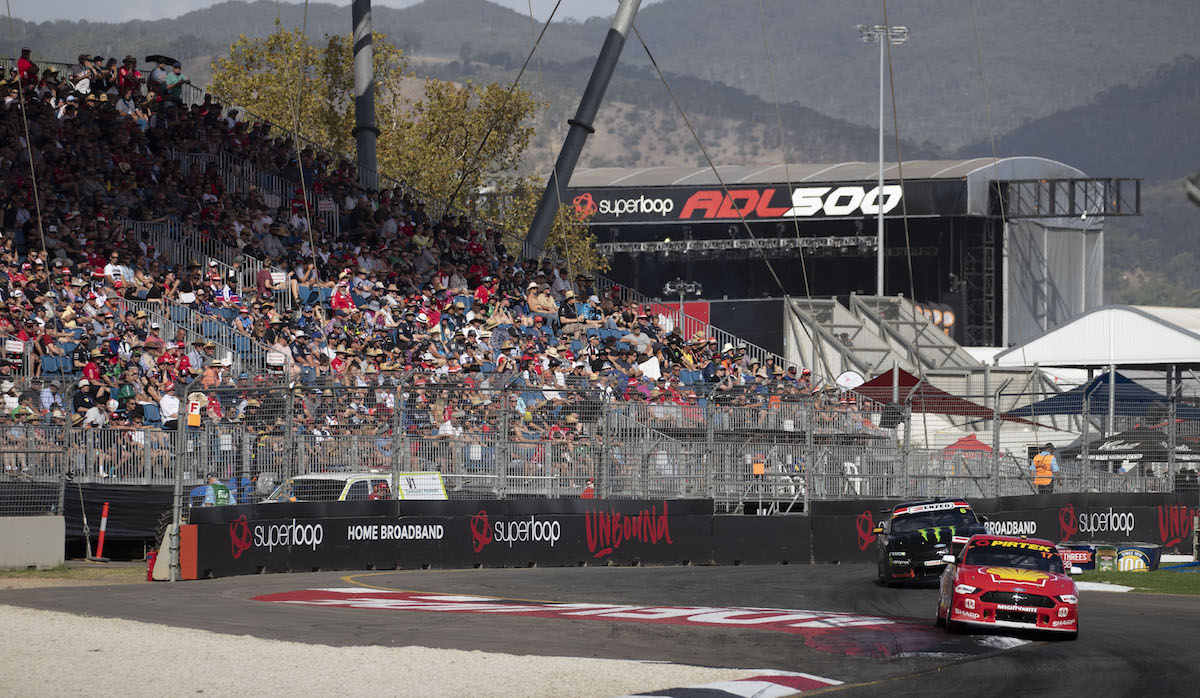 The Adelaide 500 could soon be on the move to an end-of-year date in the October-November period that held the Adelaide Grand Prix, as Supercars edges closer to a summer-based series that would allow the South Australian event to move out of ‘Mad March’.

Supercars’ calendar switch seems increasingly likely with what would’ve been the 2020 season set be a transitional schedule in the 2019/20 summer ahead of a completed new-look schedule from 2020/21. This means the Adelaide 500 could be held in late 2019 or early 2020 in the 2019/2020 transitional season, with sources within the Supercars paddock suggesting an October-November date for the event could be on the cards from 2020.

The Adelaide Grand Prix was held in early-to-mid November in 10 of its 11 years, with the end of spring date being debated by Supercars and the South Australian state government in meetings over the course of the 2019 Superloop Adelaide 500.

The new date seems to fit in with a number of other factors involving both parties: retaining an early-season slot in the new-look October to March Supercars summer schedule, as preferred by the South Australian government; filling the end of October slot currently held by the Gold Coast street-circuit event, with IndyCar weighing up a return to Surfers Paradise and preferring a February date; and the realisation that the clash between the Adelaide 500 and Fringe/Festival arts events has become too detrimental.

Noise from the Adelaide 500 was once again blamed for interfering with Fringe and Festival events, with the Festival opener, an outdoor symphony orchestra performance, clashing with the post-race concerts in Victoria Park. In 2012, then South Australian Premier Jay Weatherill infamously intervened when noise from the Adelaide 500 impacted on an outdoor Festival performance by world-renowned composer Ennio Morricone.

The growth of the Fringe has seen the arts-festival precinct increasingly intrude on the Adelaide 500’s footprint in the east-end of the CBD, particularly in Rymill Park with its access to the restaurant and café hub of Rundle Road. Moving the Adelaide 500 concert precinct from its traditional location on CBC Oval to Victoria Park not only moved it further away from the Fringe/Festival but also from Rundle Road and the CBD.

While some insist the events cater for very different demographics and interests, there is a concern it impacts on the Adelaide 500’s ability to attract non-motorsport crowds in the midst of so many other events. This point has come under the spotlight with the South Australian government now in charge of the Adelaide 500 through the state’s tourism commission, alongside Fringe and Festival, rather than the autonomous South Australian Motor Sport Board that was disbanded by the government in 2016. The Adelaide Cup and Adelaide Film Festival have already announced moves out of ‘Mad March’ to gain more traction away from other events, switching to May and October respectively.

Supercars’ summer-series move is designed to get out of the shadow of the AFL and NRL seasons and contract the calendar, rather than starting the season in February-March, having few suitable events in the warmer north of Australia across winter and continuing post-Bathurst 1000 into November.

The benefit of racing outside of the AFL and NRL season was highlighted by the 2019 Superloop Adelaide 500 with Fox Sports recording its highest-ever Adelaide ratings, with the combined average viewership on Fox Sports and Network 10 up 9.3 per cent on the previous year. The Adelaide 500 falls in what’s considered to be a “sweet-spot” for Supercars, post-the summer of cricket and tennis and before the AFL and NRL seasons. A move to summer also allows Supercars to take advantage of daylight-savings hours and running twilight/night races, away from the worst of the heat and in more favourable television times.

But the 2019 Superloop Adelaide 500 did highlight the risks of a summer move and twilight racing hours, with heatwave conditions blamed for the decrease of 14,900 fans at the event from 2018 and a delay to the Sunday race due to track repairs reducing the race distance in order to finish by a pre-determined time schedule. With the majority of tracks not having adequate lighting, races would need to be slotted into narrow windows away from the worst of the heat and before sunset.

The structure of the new-look season is still a work in progress, though the Sydney Motorsport Park Supercars night event that was left off the 2019 Supercars calendar is set to return to fill a new-year gap in the transitional 2019/20 season.

The biggest impact for the Adelaide 500 is the potential loss of the season-opening slot on the schedule, with sources suggesting the Bathurst 1000 is likely to remain in its traditional early October date and open the season. Another possibility would be for the Bathurst 1000 to move to the end of the season in February, in the date that Supercars currently runs the Bathurst 12 Hour sportscar race at Mount Panorama Circuit.

The changes to Adelaide and Gold Coast street-circuit events would be a case of history repeating, with not only the Adelaide Grand Prix in October/November but the IndyCar races on the Gold Coast run early in the calendar year in March/April from 1991 to 1997.