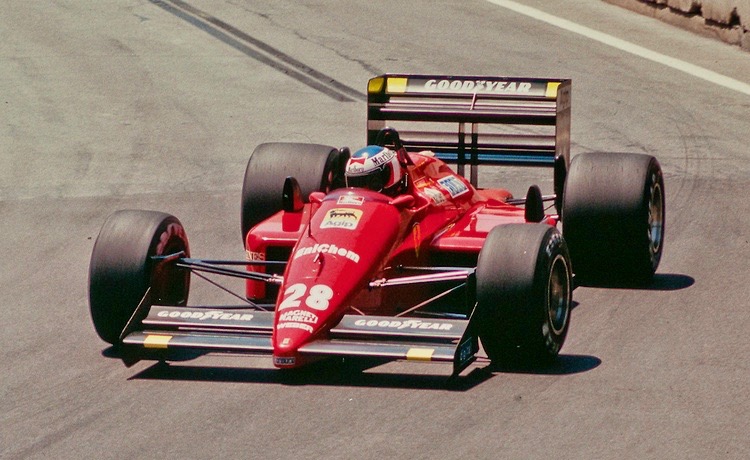 Ferrari, which ended the 1987 season as the form team, simply couldn’t compete with McLaren. There was one shining light when a rare mechanical failure for Prost and Senna tripping over a backmarker while leading left Berger to lead a Ferrari one-two on home soil in the Italian Grand Prix, just weeks after the passing of Enzo Ferrari. But it would be the only loss of the season for McLaren.

As race day loomed at the 1988 Adelaide Grand Prix, it seemed inevitable that it would be another McLaren procession. Senna and Prost were a second-and-a-half ahead of the rest in qualifying.

A year earlier Berger dominated in Adelaide, a performance that suggested the Ferrari driver would be a championship contender in 1988. Yet with just one win and resigned to the ‘best of the rest’ tag behind the McLarens, Berger was out to make a statement in Adelaide yet again.

He had had a troubled weekend with a misfire and contact with the wall that damaged the rear of his Ferrari. In qualifying, he had to settle for fourth place, two-and-a-half seconds off his pole time from 1987, though he was determined to put on a show on race day.

Berger told Prost on the morning of the race: “This is the last race of the season and the last race for the turbo. Today I want to go for it and enjoy myself. I’m not messing about stroking for fifth place.”

After jumping to third off the start, Berger barged his way through on Senna at the end of Dequetteville Terrace on lap three, making slight contact with the McLaren. Berger lived up to his pre-race prophecy be taking the lead from Prost at the same corner on lap 14. With Berger’s words no doubt ringing in his mind, Prost relinquished the position with less fight than Senna.

Berger proceeded to charge into a big lead. But with brakes and fuel economy a major concern, educated observers knew a repeat of his dominant win from the previous year was unlikely.

Sure enough, Berger’s run came to an end on lap 26. Diving up the inside of the EuroBrun of Stefano Modena and Ligier of Rene Arnoux at the end of Dequetteville Terrace while lapping them, Berger hit the rear of Arnoux and the two were out on the spot. Berger’s Ferrari wasn’t up far enough to execute the move, though Arnoux clearly hadn’t seen the race leader and closed the door.

Arnoux had developed quite a reputation as a handful for leaders while being lapped. Yet Berger did concede that his brakes were fading and he had misjudged the move. While Berger insisted he was on target with fuel, his pace relative to the McLarens and acceptance of the incident with a backmarker suggested otherwise.

“I can’t really blame Rene,” said Berger. “He shut the door on me, sure, but I think perhaps he didn’t see me because of Modena. In any case, by then I had a ‘long’ brake pedal and couldn’t brake very hard. There was no way I could miss him.”

With Berger out, it was back to the status quo: McLaren running one and two with the rest battling for the other place on the podium. Prost won ahead of Senna with the Lotus of Nelson Piquet in third.