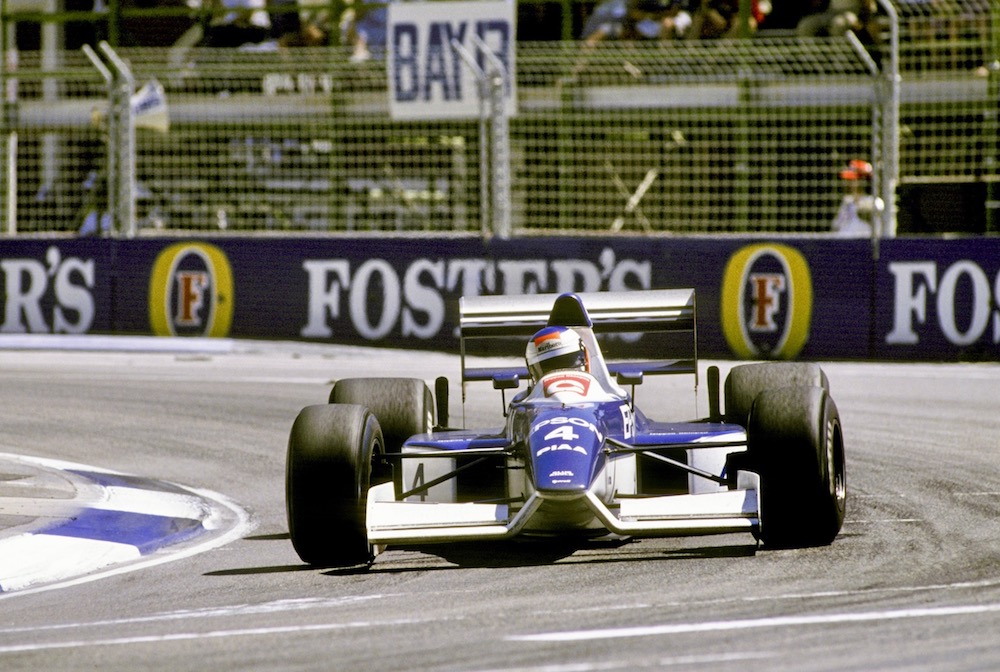 While Tyrrell was a powerhouse of the 1970s, the turbo revolution of the 1980s left the team on the back foot and struggling to survive. While other English teams such as McLaren and Williams thrived with successful partnerships with engine suppliers such as Honda, Tyrrell fell down the pecking order with increasingly uncompetitive engines.

Ken Tyrrell was fundamentally opposed to turbo engines in Formula 1, given their cost and unreliability, with his team the only non-turbo entrant in 1984. Tyrrell’s underweight 012 car required the addition of water and lead to meet the minimum weight regulations, though this was deemed illegal and Tyrrell was stripped of its results for the whole season.

The fines and loss of revenue coupled with the need to run a turbo engine from 1986 left the team on the brink, as Ken Tyrrell continued to plead innocence in his battle against the authorities over the goings-on in 1984.

Worse was to follow in 1985 with the death of driver Stefan Bellof in a sportscar accident. The German, together with Ayrton Senna, was touted as a future world champion and 12 years on from the passing of Stewart’s protégé François Cevert, the team had lost another of its great hopes.

Tyrrell rounded out the 1985 season in Adelaide with an equal-best fourth for Ivan Capelli, making his second start in Formula 1 as a replacement for Bellof. Lead driver Martin Brundle failed to score a point over the course of the season, leaving Tyrrell in ninth in the constructors’ championship.

The switch to Renault turbo engines midway through 1985 prepared the team for the following season, with turbocharged engines compulsory due to the ban on naturally-aspirated engines. Frenchman Philippe Streiff joined Brundle for 1986, a season in which Tyrrell scored six points-scoring finishes with fourth and fifth places in Adelaide for seventh in the constructors’ championship.

Tyrrell scored five points-scoring finishes, including a third consecutive fourth place in Adelaide, for sixth in the constructors’ championship and comfortable wins in the Jim Clark Trophy and Colin Chapman Trophy standings. Jonathan Palmer, who replaced the Zakspeed-bound Brundle, and Streiff were first and second respectively in the normally-aspirated standings, with Tyrrell 126 points ahead of the next best team. Given Ken Tyrrell’s anti-turbo stance, it seemed fitting that Tyrrell was so dominant in the normally-aspirated engine contest.

Turbo engines were banned from 1988 with Julian Bailey replacing Streiff. But hopes that Tyrrell’s experience with normally-aspirated engines would make a difference failed to pay dividends with just five points scored for Palmer, dropping the team down to eighth in the constructors’ championship. As the grid expanded with the more affordable engines, Tyrrell often struggled to qualify with 12 non-qualifications for both drivers across the season, including for Bailey in Adelaide.

The arrival of technical director Harvey Postlethwaite from Scuderia Ferrari led to a revival for Tyrrell from 1989. Michele Alboreto also moved to Tyrrell from Ferrari, teaming with Palmer, though the Italian lasted just six races in his second stint the team following a falling out and sponsorship dispute, despite scoring the team’s first podium in six years in Mexico. Alborto was replaced by Frenchman Jean Alesi, who impressed with a fourth on debut in the French Grand Prix. With 16 points in total, Tyrrell jumped to fifth in the constructors’ championship and had found a new rising star in Alesi.

The 1990 season marked the highpoint for Tyrrell in this era. Alesi stunned Formula 1 by leading 30 laps and fighting Senna for the win at the season-opening United States Grand Prix, taking second place and repeating that result at the Monaco Grand Prix. Teammate Satoru Nakajima added three sixth places. The Postlethwaite-designed Tyrrell 019 featured a revolutionary elevated nose-cone design (pictured above), with another haul of 16 points and fifth in the constructors’ championship.

Alesi moved to Scuderia Ferrari in 1991, replaced by Italian Stefano Modena. The switch to Honda V10 engines helped deliver a second place for Modena at the Canadian Grand Prix, though a total of 12 points saw the team drop to sixth in the constructors’ championship.

A third engine change in as many years and Postlethwaite’s departure halted Tyrrell’s progress in 1992. While Tyrrell held on to sixth place in the constructors’ championship with Ilmor V10 engines, there were no podium finishes for Andrea de Cesaris and Olivier Grouillard.

Another engine change for 1993 proved disastrous with Tyrrell failing to score a point with the uncompetitive Yamaha V10. De Cesaris and Ukyo Katayama had a combined total of 20 retirements from 16 races, with last place in the constructors’ championship adding to the financial strain on the team.

The Yamaha engine made gains into 1994 with Mark Blundell teaming with Katayama. Blundell scored a podium in Spain with the team back in the points on a semi-regular basis, recording 13 points for seventh in the constructors’ championship.

Mika Salo replaced Blundell for 1995, scoring an equal season’s best of fifth in Adelaide, though five points and eighth in the constructors’ championship was a disappointment given the gains of the previous season.

The Adelaide Grand Prix years marked the downfall of a once great team, yet Tyrrell was the most successful team not to score a podium in Adelaide with 13 points and three fourth-place finishes.

Yet the spirit of Tyrrell lives on with the incredible lineage of the team since it was sold. British American Racing was taken over by Honda in 2006, though neither entities enjoyed much success. When Honda pulled out of Formula 1 in 2009, Ross Brawn stepped in to save the team with the rebranded Brawn GP taking a shock championship double. Mercedes-Benz purchased and rebranded Brawn GP in 2010, going on to become the dominant force in Formula 1 in the current era. As Mercedes-AMG Petronas continues to rule Formula 1, it’s remarkable to think the team can be traced back to Ken Tyrrell’s battlers.