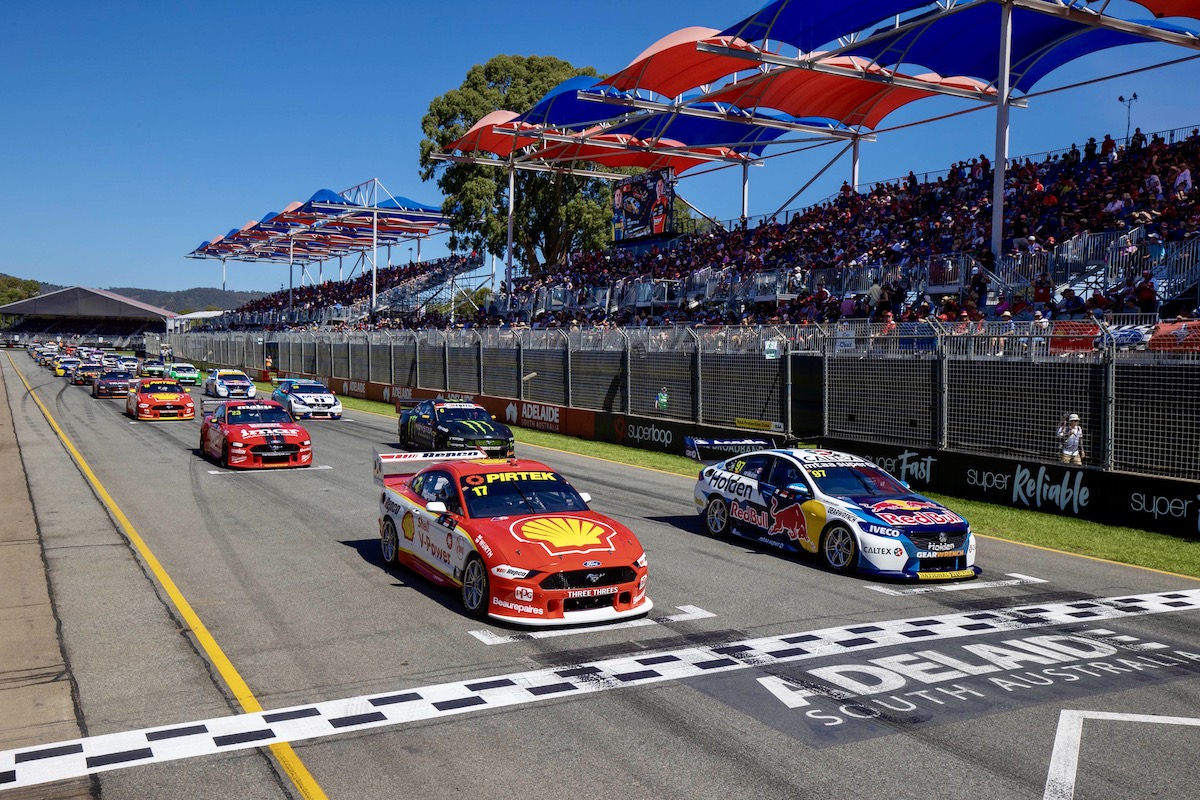 Those who attended the 2020 Superloop Adelaide 500 couldn’t help but notice the empty seats in the grandstands and sparseness of the crowd across the event precinct, certainly in comparison to previous years.

The 2020 Superloop Adelaide was blessed with perfect weather, certainly in contrast to the extreme heat and the odd day of torrential rain of recent years, and featured the return of the popular Stadium Super Trucks. There was even a pre-season test day at The Bend Motorsport Park on the Tuesday before the event, generating some momentum within the state at the start of race week. Yet that wasn’t enough to arrest the slide in crowd numbers.

The Adelaide 500 crowd has always fluctuated because of weather and the strength of the support acts, be they non-Supercars motorsport categories and, in particular, the concert line-ups. Yet the significant drop in recent years suggests there are wider issues in play.

There’s never just one or two reasons why an event of this size suffers a decline. Recent events such as the bushfires that ravaged regional South Australia coupled with economic hardships inevitably played a role in the drop for 2020. But assuming that’s the key factor fails to take into account the wider downward trend of recent years and ignores the feedback of fans.

Our social media post on the decline crowd figures generated more than 350 comments on Facebook in less than 24 hours, with organisers needing to listen to those fans in the analysis of what’s going wrong.

Yes, there are factors at play that relate to Supercars directly. These include: the impending demise of Holden, announced at the start of race week; the departure of non-Ford and Holden manufacturers; the move to pay television for the majority of its live coverage reducing its reach; the bad taste left by a season of poor parity and technical infringements in 2019; the recent retirement of crowd favourites such as Craig Lowndes; and the weakness of its support categories (just 13 cars featured in the Supercars’ second-tier Super2 category in Adelaide in 2020). But the downward trend of Adelaide 500 crowds is far more drastic and alarming when compared to the less noticeable drop at other Supercars events.

Government ministers were warned by motorsport authorities that disbanding the SA Motorsport Board risked the success of the Adelaide 500. In going ahead with the decision, the government failed to understand the vital role the boards played in the success of the motorsport events. The motorsport knowledge and event expertise accumulated since the grand prix days was mostly lost, replaced by departments who didn’t understand what they were dealing with while being spread too thin across multiple events.

The decisions since reflect the change in organisation, resulting in the malaise the fans have noted. This is a particularly a bitter pill to swallow for South Australia’s diehard motorsport fans, off the back of the government’s decision to cut funding to the Adelaide Motorsport Festival that resulted in the demise of the popular Victoria Sprint. While it’s good to see Adelaide Grand Prix-era Formula 1 cars take part in on-track demonstrations at the Adelaide 500, there was a missed opportunity in 2020 to absorb more of the Victoria Sprint historic celebration into an event that owes its existence to the grand prix and needs to be more enticing for motorsport fans.

With the government having such a hands-on role in the running of the Adelaide 500, its persistence in running it alongside the Adelaide Fringe and in previous years Festival arts events is puzzling and must also be factored in when examining the decline in crowds. While the government can boast of booked-out hotels and the party vibe of what’s described as ‘Mad March’ (more so February), it has set itself up to have one of its events isolated and squeezed out by the other.

The recent change in location of the Adelaide 500 concert stage from the ovals in between Bartels Road and Wakefield Road to Victoria Park further shifts the event crowd away from the city centre. Now, the concert crowds mainly leave the precinct at Fullarton Road, rather than heading into the east-end of the city. Supercars teams and personnel who once joined the festivities post-race will instead fly out of Adelaide on the Sunday night, in order to reduce the number of nights they have to stay in high-cost accommodation often booked out by Fringe performers.

The Adelaide 500 is, therefore, no longer creating the city-based carnival atmosphere it once did as the Adelaide Grand Prix’s offspring. It’s now the Fringe and Festival that dominate the east-end and have the biggest visible presence around the city, meaning the Adelaide 500 is seen as the unpopular and noisy neighbour by many.

While the Adelaide 500 once led the party in the city on that weekend, it’s now contained within the precinct with the fans that do leave attending Fringe locations and Fringe-inspired events instead. This may suit the government, considering these events are all within their realm, but it leaves the Adelaide 500 little room to spread its wings as the Adelaide Grand Prix did in inspiring offshoot activities.

The date clashes and precinct proximity have led to some embarrassing incidents, most notably in 2012 when noise from a night race at the Adelaide 500 could be heard at an outdoor concert for the Adelaide Festival across town. Then premier Jay Weatherill called race organisers and demanded they stop the race, fearing the concert by world-renowned composer Ennio Morricone was being drowned out by the cars.

The government has for too long assumed that the number of fans that have always turned out for the Adelaide 500 will be enough for the event to continue to thrive. But as the rusted-on motorsport fans diminish in numbers, the Adelaide 500 desperately needs to attract casual fans to replace them to maintain its marquee status. However, with such direct opposition on at the same time in such close proximity and, arguably, offering better value for money, the event has no hope of bringing in this much-needed injection of people.

The Adelaide 500 organisers should be applauded for recent innovations such as the ‘Tracks of the World’ sections, hang-out spots themed around iconic international motorsport circuits. Such spots help diversify what’s on within the track and can attract non-motorsport fans to the event. Yet when they can go to the Fringe gardens for a similar experience free of charge within the city on the same weekend, they are less likely to pay to attend at the Adelaide 500.

Government-run events of this size cannot continue to compete with one another, not when economic hardships mean people have less disposable income. By having them on at the same time, one will inevitably suffer at the expense of the other. They need to be given their own free space to dominate in a city the size of Adelaide.

A case in point was in 2017, when the Adelaide 500 bucked with a tradition that dates back to the early years of the Adelaide Grand Prix and didn’t schedule a Sunday night concert, with the Adelaide Festival opening concert featuring Paul Kelly and Neil Finn on that same night. Organisers hoped the Adelaide 500 crowd would go that concert instead, on the other side of the city. The result was a 13-year low Adelaide 500 event crowd and 16-year low Sunday crowd.

Then sport minister Leon Bignell said the government thought “it would be crazy to have two free concerts on the one night”, ignoring the fact that it persists with staging two major events in such close proximity at the same time.

It’s also important to note that that 2017 event crowd, despite the absence of a Sunday concert, was still 38,000 up on 2020, suggesting the blame cannot lay on the Australian-only acts that appeared at the latter. All four days were down in 2020, not just the Sunday. Once again, there needs to be an acknowledgment of the larger issues in play.

If the Adelaide 500 is to reverse the slide, it needs to consider a new date and perhaps relinquish the season-opening slot on the Supercars schedule. The first event in 1999 was held in April, in a time of year that would give the Adelaide 500 the free space it needs to regain some lost ground. A move to the end of the season in November/December could also be considered, not only away from the arts festivals but also in replicating the Adelaide Grand Prix’s place on the calendar.

Supercars must also reconsider its calendar with a season of 14 events spread too thinly from February to December, limiting the ability to create momentum and consistency for a category that already struggles for mainstream attention.

With the 2020 Superloop Adelaide 500 a week earlier than in recent years, in addition to having the test day on the Tuesday before, many teams were ill-prepared for the new season. At a time when teams are struggling to survive amid the uncertainty around the category, further testing them with a shorter off-season is foolish.

As Supercars enters a critical phase in determining its future direction without Holden, the Adelaide 500 also needs to do some serious self-examination. Its organisers cannot just blame external factors for the decline in their crowd figures. However, it remains to be seen if the departments that have been in charge for this decline are capable of bucking the trend.