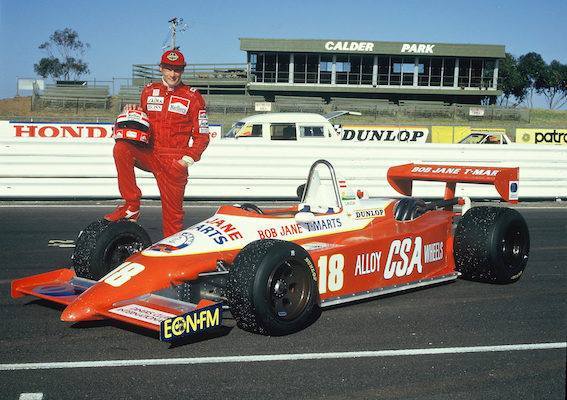 The race to host a Formula 1 world championship Australian Grand Prix truly heated up in 1980.

Alan Jones became the second Australian after Jack Brabham to win a Formula 1 world championship in that season. Jones’ success sparked an interest in Formula 1 back in his homeland, leading to Channel Nine showing regular telecasts of grand prix racing.

In the same year, Bob Jane took over the running of the non-world championship Australian Grand Prix at Calder Park Raceway, revitalising an event that had stagnated. The 1980 grand prix included Formula 1 cars with Jones headlining and winning the race in his championship-winning Williams FW07B Ford.

With Prime Minister Malcolm Fraser supporting a Formula 1 event in Australia, with the promise of multi-million dollar government funding for a potential host, it was up to states, circuits and promoters to come up with a suitable option.

Also by this time, Bernie Ecclestone had well and truly wrestled control of Formula 1’s commercial rights through his Formula One Constructors Association (FOCA), seeking to expand the sport’s horizons and commercial possibilities entering the 1980s. Having all-but exhausted its options of permanent tracks in Europe and North America and seeing the potential of marquee events in city centres, Ecclestone favoured street circuits in new markets such as Australia.

“Why should I go all that way to have it on a racetrack?” said Ecclestone.

“It’d be easier to put some gum trees at Brands Hatch [England] and call it the Australian Grand Prix. You’ve got to understand that people want to see a city.”

Adelaide, though, seemed like a rank outsider given the other more populous Australian cities lining up with their own bids.

Calder Park, to the north-west of Melbourne, shaped as the early favourite; the then host of the Australian Grand Prix having boosted the event by including Formula 1 stars, such as Jones, Niki Lauda (pictured above), Nelson Piquet, Alain Prost and Keke Rosberg.

Plans for a significant upgrade and a name change to Melbourne International Raceway were the foundation of the bid to entice Formula 1 from 1984.

Jane, one of Australia’s most successful racing car drivers turned entrepreneur and owner of Calder Park, soon realised, though, that his circuit didn’t meet Ecclestone’s criteria.

“I’ve faced the reality of what Ecclestone wants for Formula 1; he’s the man with the final say and he wants a street race in Australia,” said Jane.

“That rules us out. Now we won’t be running a grand prix, but I still hope Australia gets the chance. I’m prepared to co-operate with Ecclestone and with anyone he engages to organise a race here.

“South Australia had the backing of the government and it became clear that was the best proposal for the Australian Grand Prix, something we all wanted to see happen and could see the benefits to all of us in motorsport.”

On the other side of Melbourne, to the south-east of the city, Sandown Raceway emerged as a contender, having hosted the Australian Grand Prix six times between 1964 and 1978.

Sandown’s bid received initial state government interest before a change of parties, with plans to extend and widen the track to meet international requirements. David Hardy, president of the Light Car Club of Australia that ran the circuit, said: “It’s a gamble… the money must be spent and the circuit built before Bernie Ecclestone will talk turkey.”

The Confederation of Australian Motor Sport (CAMS), the governing body of Australian motorsport that insisted it should lead any bid for a grand prix, appeared to be backing Sandown’s push, though it was also weighing up a proposal to build a new track at Ravenhall to the west of Melbourne.

When Sandown reached out to Ecclestone to alert him of the $3 million it would spend on upgrades, he responded that he didn’t care if the track spent $30 million, Sandown wouldn’t be hosting Formula 1. He stated that the travel time and time-zone difference in Australia negated any benefits of racing there on a permanent circuit.

There was talk of reviving the Albert Park street circuit that hosted the Australian Grand Prix in 1953 and 1956, which the Adelaide bid believed would be a serious contender with speculation about a multi-million dollar investment by the Victorian government into Albert Park.

Victoria, though, had seen first-hand the fragility of street-circuit proposals with the loss of public support condemning the Albert Park circuit in the 1950s and a proposed touring-car event on the streets of Geelong in the 1980s never happening.

With the local government unwilling to fund the proposals and Calder Park already hosting the non-championship Australian Grand Prix, there would be no support for a street-circuit alternative. The Melbourne strategy, be it at Sandown or Calder, was that Formula 1 would have to settle for an adequate permanent circuit when the street-circuit proposals failed to materialise.

Paul Dainty, an entrepreneur best known for promoting high-profile musical events, launched plans for a street circuit that would encompass the Rocks area, the Harbour Bridge, Circular Quay and past the Opera House.

The bid had the backing of key figures in Formula 1, many of whom only knew of Australia through Sydney.

Three-time Formula 1 world champion Jackie Stewart, a regular visitor to Sydney through various promotional roles, described it as “the most beautiful metropolis I visit in my travels, and yet half the world doesn’t know it’s there”.

“The harbour, the bridge, the city skyline and the Opera house would make a magnificent backdrop to a Formula 1 race,” he said.

“I think it’s ideally suited for a street race, particularly at present when the vogue is in favour of street racing.”

Dainty’s aim was to attract investment of $4 million across a three- or four-year period, with the cost of the first event estimated between $4 million to $6 million. He argued the street circuit could attract that level of investment, given the extra interest it would generate compared to a permanent circuit. Also, it suited Ecclestone’s requirements.

“He’s very keen to have a race in Australia, but he’s not keen to have the teams come all this way unless it’s going to be for a street race,” said Dainty.

“He’s not just looking for another race on the calendar. He’s looking for races that will add charisma and image to the whole grand prix circuit.”

However, Dainty warned, it couldn’t happen without the support of the local government and council. He promised it “would be a magical event, worth all the effort and aggravation”.

Though the local government was initially interested, it wouldn’t come through with the necessary backing. Also, the Sydney city council and local businesses were unsupportive, forcing Dainty to plan for a team of 300 to 400 people to sell the proposal within the community.

With no track route made available to the public, only adding to the doubts around it all, concerns over congestion and disruption of the proposed four to five-kilometre layout proved to be a fatal blow.

Sydneysider Peter Wherrett, a racer turned motoring journalist, bluntly said: “Sure, I’d like to see it happen, but I’ve looked at every possible route in the logical areas and they just don’t work.”

The stuttering Sydney bid was in direct contrast to Adelaide, which had the backing of the city council and state government.

“One suspects that in a larger Australian city the common purpose so obvious in Adelaide would not be there,” said journalist Alan Kennedy.

“It’s not hard to imagine Sydney foundering in a maelstrom of pressure groups, factionalism and petty jealousies if it tried to stage a GP.”

There were more obscure bids, including in the nation’s capital of Canberra with talk of a multi-million dollar international-standard permanent circuit, and in Queensland, with speculation around a new street circuit or upgrade of the Surfers Paradise International Raceway.

With these bids failing to meet Ecclestone’s demands or falling by the wayside, Adelaide emerged as the only option.