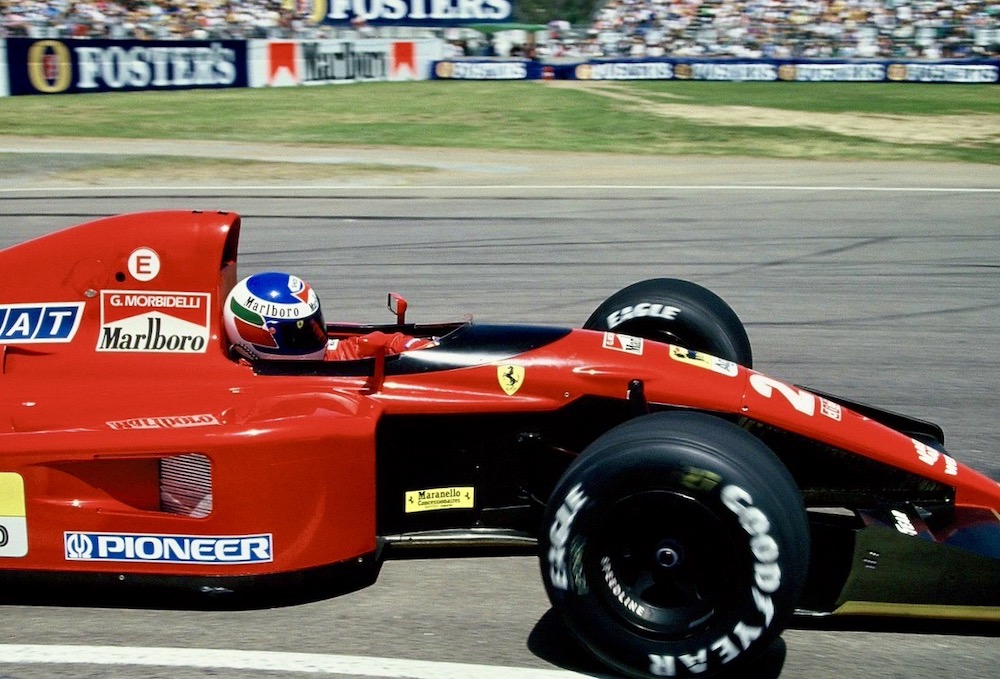 Two moments stand out in Gianni Morbidelli’s 67-race and six-season Formula 1 career, both of which occurred at the Adelaide Grand Prix.

The Italian made his one and only start for Scuderia Ferrari in Adelaide in 1991, replacing Alain Prost, and was running in third place when the race was red flagged. With the results taken from earlier on, Morbidelli dropped to sixth place. Four years later, Morbidelli scored his long-awaited podium finish in Adelaide, in another race of attrition in 1995.

Morbidelli was born into a motoring family. His father Giancarlo Morbidelli founded the Morbidelli motorcycle manufacturer, with Gianni opting for four wheels and winning Italian and European Formula 3 titles in a boom time for Italian racers.

He made his unexpected Formula 1 debut in place of the ill Emanuele Pirro at BMS Scuderia Italia in the first two races of the 1990 season, in addition to a test driving role with Scuderia Ferrari.

Morbidelli remained with Minardi in 1991, with the Italian minnow switching from Ford to Ferrari engines. He recorded four top-10 finishes but didn’t score a point leading into the last race of the season in Adelaide, when Scuderia Ferrari came calling.

Prost struggled throughout 1991, with his criticism of the Ferrari 643 following the Japanese Grand Prix resulting in the firing of the Frenchman leading into Adelaide. As the team’s test driver, Morbidelli gained promotion for the dream opportunity for any Italian racer.

“I’d already got to work with Alain Prost and Nigel Mansell in testing, which was like a dream for a young driver,” Morbidelli told Motorsport.com.

“Prost was my idol! Then one day I got to replace him at Ferrari… I was in my very early twenties. At that time, drivers didn’t arrive in Formula 1 at such a young age, like today, so it was a brilliant experience. Racing for Ferrari was an incredible moment for me.

“I only got the call, while I was on holiday in Port Douglas, to say I would be driving for Ferrari, not Minardi, at 11 o’clock on the Tuesday night before the race weekend.

“To replace Prost, my favourite driver, I had to ask the pitwall on the radio during practice: ‘Am I dreaming?’”

Morbidelli qualified in eighth place, six-tenths and one position behind teammate Jean Alesi, and avoided the surrounding carnage in the wet conditions on race day to be running in third place before being classified in sixth. Half points were awarded, giving Morbidelli half a point for his first points-scoring finish in Formula 1.

“I actually crossed the finish line in third place, behind [Ayrton] Senna and [Nelson] Piquet, but they put me back to sixth place because of the red flag rules,” said Morbidelli.

“Morally, I was third, but you have to accept what life throws at you. I was doing a job I had great passion for, with the biggest team in the world, so I think I can be satisfied with what I did. Who knows what would have happened if it had stopped raining and we had restarted?”

Morbidelli returned to Minardi in 1992, though a change of engines to Lamborghini saw the team score just one point across the season, with a 10th place in Adelaide.

With the momentum from 1991 lost in 1992, Morbidelli spent 1993 in Italian touring cars before a return to Formula 1 with Footwork in 1994 for a two-year stint that netted four-points scoring finishes, including a podium in Adelaide in 1995.

Morbidelli qualified in 13th and climbed through the field in a race of attrition. Sitting in third place in the closing stages, Morbidelli could have taken second with Ligier’s Olivier Panis suffering an oil leak. Nevertheless, third place was a first podium for the Footwork/Arrows in six years and what would be the only podium for Morbidelli in Formula 1.

“In a way that was an even greater moment for me, because we were in a very bad financial situation.”

Out of a drive at the end of 1995, Morbidelli spent 1996 as a test driver for Jordan. Another call up followed as a replacement for Nicola Larini at Sauber in 1997, though injuries and limited opportunities ended Morbidelli’s time in Formula 1.

There was even a return to Australia to race as an international co-driver in Supercars’ Gold Coast 600, alongside Dean Fiore at Triple F Racing from 2010 to 2012; a cameo in the country that gave him his two Formula 1 highlights.