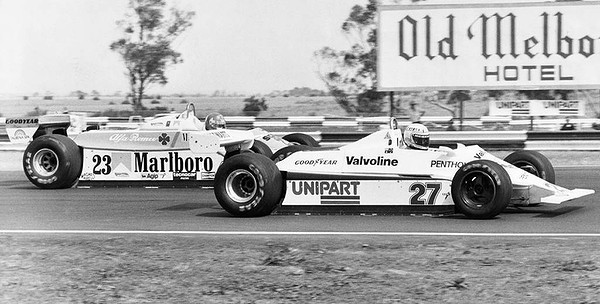 1980 was a turning point in the history of the Australian Grand Prix, and a celebration for Australia’s second Formula 1 world champion.

It was the first of five Australian Grand Prix events to be held at Calder Park Raceway, with former racer turned tyre magnet/circuit owner Bob Jane seeking to “restore the race to the international importance it deserves” and earn a place in the Formula 1 world championship.

The grand prix coincided with Alan Jones winning the 1980 Formula 1 world championship. Jane paid Frank Williams to bring the championship-winning Williams FW07 Ford so Jones could race in the non-championship grand prix in Australia, following an amendment to the regulations to allow Formula 1 cars to race alongside the Formula 5000/Formula Pacific entries.

Fellow Formula 1 drivers Bruno Giacomelli and Didier Pironi also entered the race. Giacomelli drove the other grand prix car in the field, an Alfa Romeo 179, with Pironi in an Elfin MR8. Local racers filled out the rest of the grid, including John Bowe, Alfredo Costanzo, Garrie Cooper, Jon Davison and more. John McCormack entered a McLaren M23 but was injured in a road crash on his way to the event.