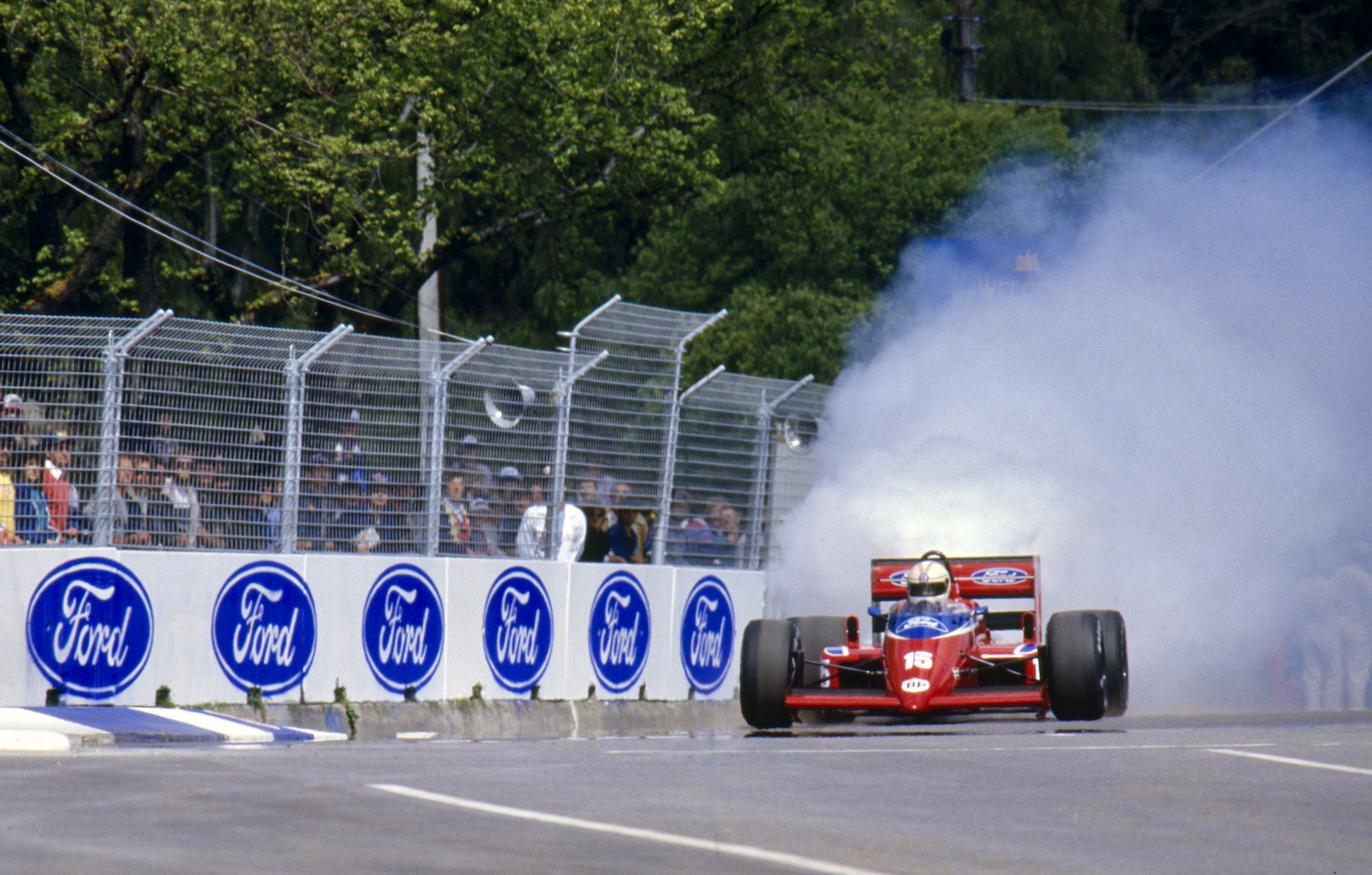 The season-ending Adelaide Grand Prix marked the last appearance in Formula 1 for legendary drivers such as Niki Lauda, Keke Rosberg, Nelson Piquet and Alain Prost, amongst others.

It also saw a number of teams make their final starts in Formula 1 before bowing out, including multiple championship-winner Lotus, manufacturer-backed entries Alfa Romeo and Renault and one-season entrant Modena.

These are the teams that made their final starts in Formula 1 in Adelaide:

The Italian manufacturer’s second stint in Formula 1 failed to reach the championship-winning heights of its first in the 1950s. Alfa Romeo was unable to score a win in seven seasons between 1979 and 1985, ending its final season without a point with a double retirement for Eddie Cheever and Riccardo Patrese in Adelaide. It withdraw at the end of 1985 with primary sponsor Benetton moving into team ownership. Alfa Romeo reappeared in partnership with the Sauber team in 2019.

The British team entered Formula 1 in 1981 and is best remembered for its 1984 season, in which rookie Ayrton Senna claimed three podiums. His departure accelerated a dramatic fall in 1985, failing to score a point with the team sold to Benetton following retirements for Teo Fabi and Piercarlo Ghinzani in Adelaide.

The French giant revolutionised Formula 1 with the introduction of turbo-charged engines in 1977, though failed to capitalise on its head-start with the technology after narrowly missing out on the title with Alain Prost in 1983. Despite a run of podium finishes in 1984 and into 1985, a sudden decline in performance and financial hardships for the parent company saw the team withdraw from Formula 1 with a double retirement for Patrick Tambay and Derek Warwick in Adelaide. Though Renault reappeared in Formula 1 in the 2000s, it did so with the purchase of the Benetton team.

The American team entered Formula 1 with big ambitions in 1985, starting with a single car for Alan Jones before the addition of a second for Patrick Tambay in 1986. The duo scored six points across two races in the latter stages of 1986, though ended the season with retirements in Adelaide (pictured above). The loss of primary backer Beatrice and the uncompetitive engine and chassis saw the team fold at the end of 1986.

After a promising season and a half, which saw Rial score six points from two fourth places, the German team lifted itself out of the pre-qualifying bracket only to struggle to make it into the final cut for the grid. Bertrand Gachot and Pierre-Henri Raphanel failed to qualify in Adelaide, with the team folding soon after.

The German team entered Formula 1 in 1985 but only scored two points across five seasons, failing to qualify for all but two races in its final season in 1989. It never recovered from dropping into the pre-qualifying mire, with a double non-qualification for Bernd Schneider and Aguri Suzuki in Adelaide.

The Italian team was a regular in Formula 1 for a decade, though scored just five points from 11 seasons. It often failed to make it out of qualifying in its final few seasons, downsizing to one entry for Olivier Grouillard in 1990 with a rare start and race finish in Adelaide. The team was sold and rebranded to Fondmetal in 1991.

The Italian team qualified for just 13 races over the course of a five-year spell in Formula 1, failing to qualify for all four of its appearances in Adelaide with drivers Gabriele Tarquini, Roberto Moreno, Enrico Bertaggia, Bertrand Gachot and Naoki Hattori. The latter was more than five seconds off the pace in the pre-qualifying session in Adelaide in 1991. The team was sold and rebranded to Andrea Moda in 1992.

Modena partnered with Italian automotive legend Lamborghini for an entry into Formula 1 in 1991. The team qualified for just five races with Lamborghini withdrawing its backing midway through the season, leading to Modena’s eventual closure. One of those race starts was in Adelaide, though Nicola Larini crashed in the wet conditions with teammate Eric van de Poele unable to make it through qualifying.

The British constructor was a regular presence in Formula 1 in the 1970s, winning races with its own team and as a supplier to other entrants. March resurfaced in association with Japanese brand Leyton House in 1987, with Ivan Capelli and Maurício Gugelmin both scoring podiums across the 1988 and 1989 seasons. But Leyton House soon ran into financial trouble, leading to a change back to March in 1992. With reduced backing the team dropped further down the grid, with Jan Lammers and Emanuele Naspetti well off the pace in Adelaide. The team folded ahead of the 1993 season due to a lack of backing.

The French team, best remembered for its colourful liveries, scored points in seven of its eight seasons in Formula 1, including a podium finish with Aguri Suzuki in 1990. But the cost of developing its own chassis and a lack of sponsorship saw the team rely heavily on pay drivers, including Jean-Denis Délétraz and Hideki Noda in its final race in Adelaide in 1994. Plans to continue in 1995 fell by the wayside with the lack funding.

The iconic British team won seven constructors’ and six drivers’ championships between 1963 and 1978. After the sudden passing of founder Colin Chapman in 1982, the team returned to the fore under the management of Peter Warr with Ayrton Senna winning races between 1985 and 1987. But subsequent ownership changes and uncompetitive seasons led to the team’s demise following a double retirement for Mika Salo and Alessandro Zanardi in Adelaide in 1994.

The British team entered Formula 1 in 1994 and failed to qualify for all but five races. Despite being able to make it onto the grid in 1995, with the reduction in entries doing away with non-qualifiers, Pacific never finished in the points with an equal-best result of eighth for Bertrand Gachot in Adelaide before withdrawing from Formula 1 soon after.

CLICK HERE for the teams that didn’t make it to the season finale in Adelaide.