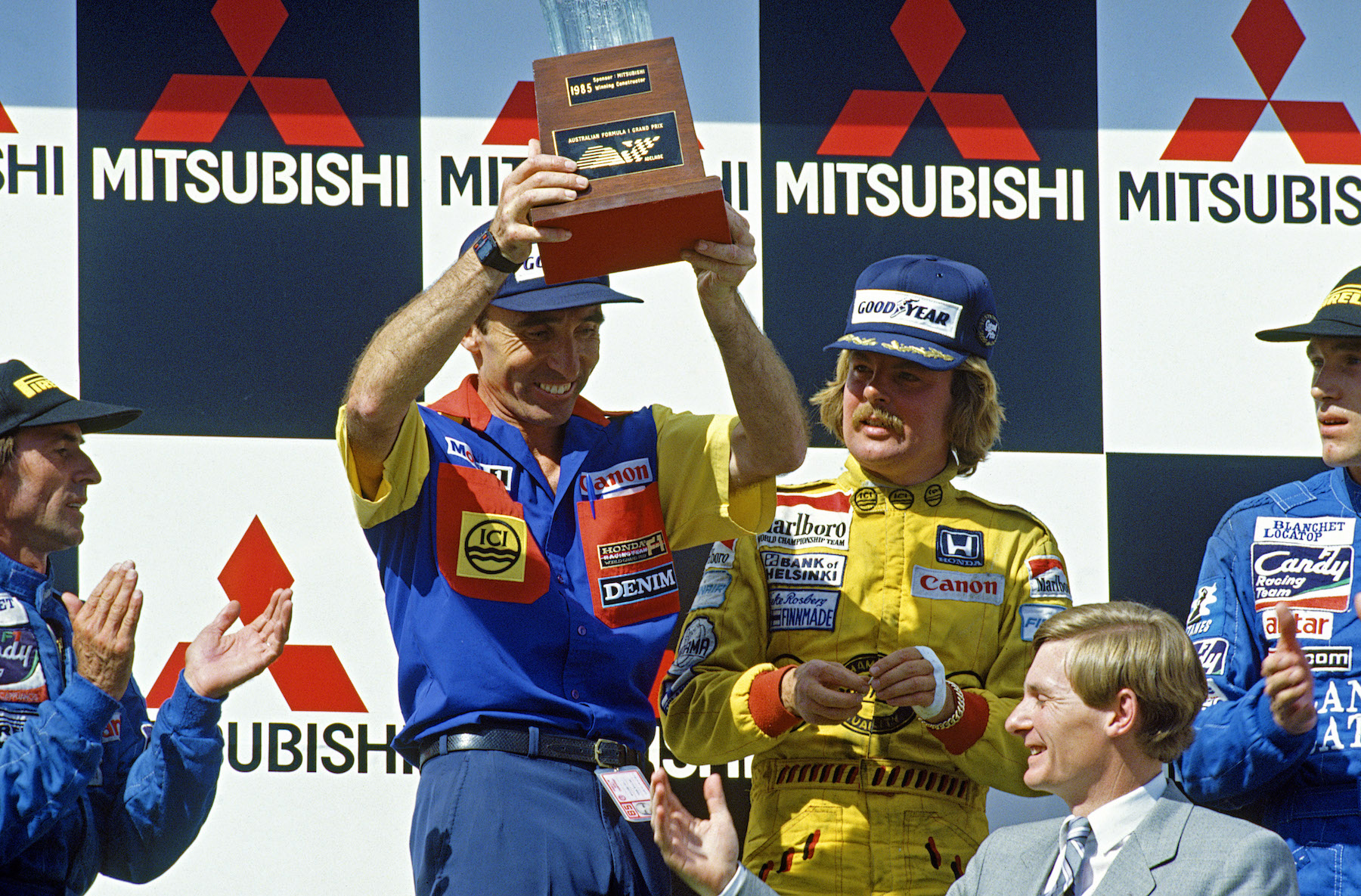 Williams founded Williams Grand Prix Engineering in 1977 and with technical chief Patrick Head alongside, the team broke through for its first win on home soil courtesy of Clay Regazzoni at the British Grand Prix in 1979.

Australian Alan Jones handed the team its first drivers’ and constructors’ championship wins in 1980, kick-starting a two-decade run in which Williams and fellow British team McLaren fought for superiority.

Further championship success followed for Williams with Keke Rosberg in 1982, though a switch to Honda engines saw the team forced into a couple of lean years as it helped develop the turbo-charged engine.

The Williams Honda package hit race-winning form at the end of the 1985 season, with two wins for Rosberg and two for Nigel Mansell. Rosberg ended the season with victory at the inaugural Adelaide Grand Prix, joined on the podium by Williams. It would be the last appearance on a podium for the team boss (pictured above).

Williams was paralysed in a car accident in the south of France in March 1986, though he remained a central figure in his team which won a third constructors’ title that year despite Mansell missing out on the drivers’ championship following a spectacular tyre failure in Adelaide.

Williams fought back with the championship double in 1987, with Nelson Piquet getting the better of Mansell, though the now-dominant Honda engine would switch to McLaren for 1988, leaving Williams with uncompetitive Judd powerplants for a winless season.

A partnership with Renault netted two wins in 1989, including at a wet Adelaide Grand Prix with Thierry Boutsen. Another two wins followed in 1990, with the William Renault combination emerging as a genuine threat to McLaren Honda in 1991 with Mansell returning to the team after a two-year spell at Scuderia Ferrari.

After a late-season charge in 1991, the Williams FW14B Renault dominated in 1992 with nine race wins and a long-awaited championship success for Mansell. However, the season ended in acrimony following a contract dispute between the two parties.

Three-time world champion Alain Prost replaced Mansell in 1993 and duly won a fourth title, ably supported by rookie Damon Hill, with Williams taking out its sixth constructors’ championship. Prost ended his career with second place in Adelaide, behind long-time rival and his replacement at Williams for 1994, Ayrton Senna.

The Senna-Williams dream team ended in tragedy with Senna’s fatal accident at the 1994 San Marino Grand Prix. Hill took over the mantle as the team’s number one, pushing Benetton’s Michael Schumacher into a championship decider in Adelaide with their controversial collision handing the title to Schumacher. The constructors’ title and a win for the returning Mansell in Adelaide was some consolation.

Williams lost out again to Benetton and Schumacher in 1995, though the team ended the season with a dominant win for Hill in Adelaide for its fourth and final victory at the Adelaide Grand Prix.

Further championship wins followed in 1996 and 1997, with the former a title success for Hill, with the withdrawal of Renault at the conclusion of 1997 marking the end of Williams’ championship successes.

A partnership with BMW netted race wins but no championships between 2000 and 2005, with the move away from a manufacturer alliance dropping the team down the competitive order.

Williams stepped down from the team’s board of directors in 2012, handing over his responsibilities to daughter Claire Williams. The Williams family sold the team to Dorilton Capital in September 2020, though the team retains the Williams name.

“Sir Frank was a legend and icon of our sport,” said Jost Capito, Williams CEO and team principal.

“His passing marks the end of an era for our team and for the sport of Formula 1. He was one of a kind and a true pioneer.”

“Despite considerable adversity in his life, he led our team to 16 world championships making us one of the most successful teams in the history of the sport.”

“His values including integrity, teamwork and a fierce independence and determination, remain the core ethos of our team and are his legacy, as is the Williams family name under which we proudly race.”