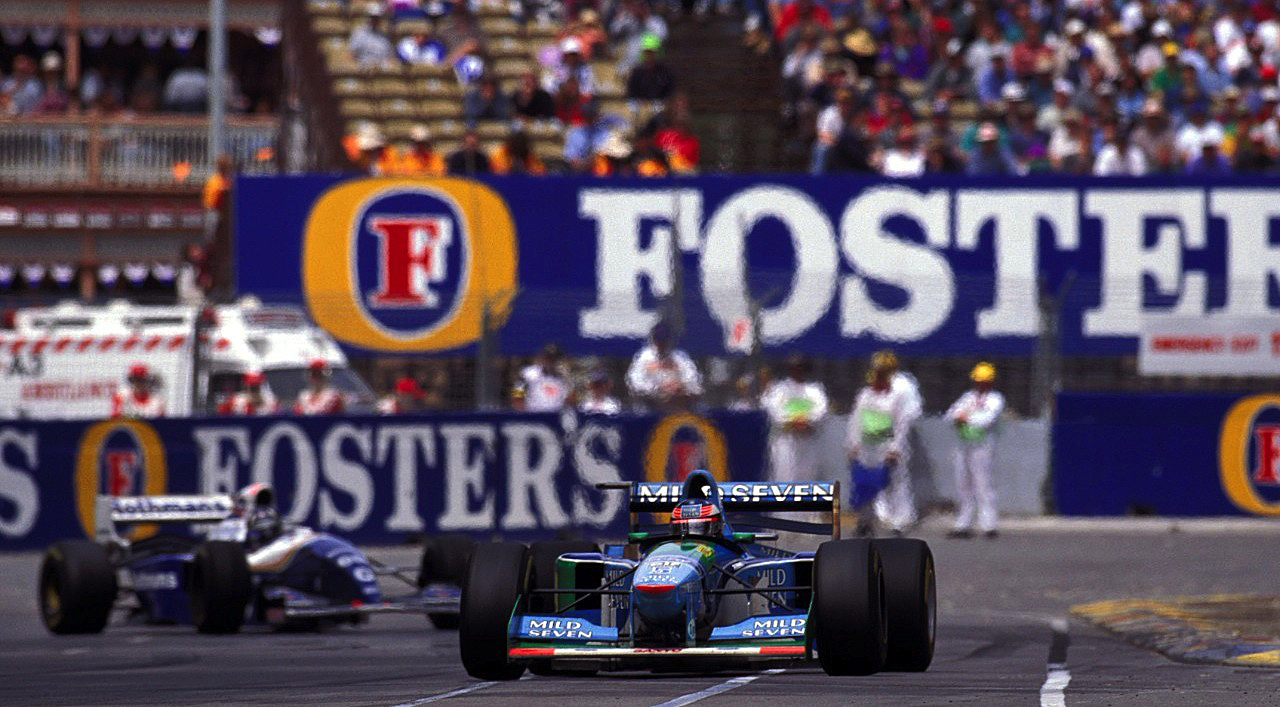 Few drivers have made such an immediate impact on Formula 1 than Germany’s Michael Schumacher.

An opportunity to break into the category came up through strange circumstances when Jordan Formula 1 driver Bertrand Gachot was imprisoned for assaulting a taxi driver in London.

Jordan needed a replacement driver for the Belgian Grand Prix at Spa Francorchamps and opted for Schumacher, mainly due to the backing he provided to the first-year Formula 1 team from the his sportscar team, Mercedes-Benz.

Schumacher matched the team’s best qualifying result of the season with seventh place. And though his race ended with a clutch failure off the start, he had done enough to impress the Formula 1 paddock and kick-start a frantic battle for his services.

He was signed by Benetton on a multi-year deal and debuted with the team at the very next race in Italy, promptly scoring points in three consecutive races and outqualifying his teammate, three-time champion Nelson Piquet.

But Schumacher was still a raw product, as he demonstrated in his first appearance in Adelaide when he spun off in the rain-shortened race.

Schumacher returned to Adelaide a year later as a race winner. He won on the anniversary of his debut in Belgium, the only non-Williams or McLaren driver to win throughout 1992.

Following Nigel Mansell and Ayrton Senna’s collision and Riccardo Patrese’s retirement, Schumacher pressured eventual winner Gerhard Berger all the way to the line at the 1992 Australian Grand Prix. In the process, Schumacher set the fastest lap of the race and secured third place in the championship in his first full-time season.

Benetton couldn’t match the pace of Williams and McLaren in 1993, though Schumacher did win for a second time in Portugal. Once again he was the only non-Williams or McLaren to win a race and was best of the rest in the championship standings with fourth place, despite retiring from the Australian Grand Prix with engine troubles.

Into 1994, though, the Formula 1 landscape changed dramatically. Senna moved to Williams and shaped as the driver to beat, though it was Schumacher and Benetton that emerged with victory in the opening two races in Brazil and Japan.

Tragedy struck at the third race in San Marino when Senna lost his life in an early race accident. With Senna gone, Prost retired and Mansell racing in IndyCar, Schumacher was thrust into the spotlight as Formula 1’s leading protagonist.

Damon Hill took over the mantle as Williams’ number one and Schumacher’s chief rival, as a year of controversies saw the championship go down to the wire in Adelaide.

Williams recruited Mansell to help its championship bid and the returning former champion scored pole in Adelaide, while Schumacher overcame a qualifying crash to join him on the front row and ahead of Hill.

Schumacher and Hill raced away from the pack until lap 36. Schumacher ran wide on East Terrace and brushed the wall. Hill dived to the inside ahead of the next corner and the two collided. Schumacher’s Benetton ran off into the tyre barrier and retired on the spot, while Hill crawled back to the pits with suspension damage.

With both drivers out, Schumacher won the title by one point and became the first German driver to win a Formula 1 world championship. It was the first of a number of driving misdemeanours that marred Schumacher’s career.

In the following season Schumacher sealed the title at the Pacific Grand Prix with two races still remaining. Hill was yet again the main challenger, opening the season with two wins from the opening three races. But Schumacher gained the ascendancy with commanding wins in the middle of the season.

Tensions would again flare between the two with collisions in Britain and Italy, by which time the German was well in control in the championship standings as a combination of strategic and driver errors derailed Hill’s season.

Schumacher’s final for outing for Benetton came in Adelaide in 1995. Schumacher collided with Ferrari’s Jean Alesi in the race, ironic considering the two were swapping seats in 1996. Both retired in the pits and had an awkward post-race exchange.

The Australian Grand Prix’s move from Adelaide to Melbourne coincided with Schumacher’s move to Ferrari. It was the start of a new era in Formula 1, as Schumacher led a renaissance for the Italian make with five consecutive championship wins from 2000 to 2004.

As fans await word on Schumacher’s fate following a skiing accident in 2013, they often reflect on his dominant spell with Ferrari. But Adelaide fans remember Schumacher for his Benetton days, from his meteoric rise in 1991 to the controversy of 1994 and farewell in 1995.