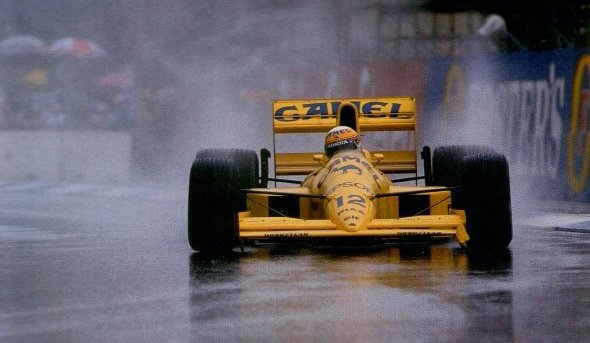 Nakajima qualified his Lotus Judd in 23rd place, five places behind teammate Nelson Piquet, in what had been a challenging season for the team following its split with Honda at the end of the previous year.

Nakajima joined Lotus as part of its deal to run Honda engines from 1987 and remained with the team into 1989, failing to score a point heading into Adelaide that season.

His aversion to street circuits saw him fail to qualify for the Monaco Grand Prix in 1988 and 1989 in addition to Detroit in 1988 and Montreal in 1989, though the rain on race day in Adelaide in 1989 would give Nakajima a chance to silence his critics.

The race didn’t start according to plan when he spun at the first chicane on the opening lap, falling behind the medical car as he recovered and got going again. What followed was a storming drive through the field.

While Alain Prost refused to race given the conditions and the likes of Gerhard Berger, Ayrton Senna, Nigel Mansell and Piquet crashed out, Nakajima kept out of trouble and stayed on the lead lap.

Nakajima set the fastest lap of the race with six laps to go as he chased down Riccardo Patrese in third place, which would’ve been a first podium finish for the Japanese driver. He had to settle for fourth place, though, just five seconds behind Patrese as one of four drivers to finish the complete distance in a race that lasted the maximum two hours.

The fourth place was an equal career-best finish in Formula 1 for Nakajima, in his final race for Lotus.

Nakajima moved to Tyrrell in 1990 and raced on into the following season, ending his Formula 1 career as the first retirement in the also wet 1991 Adelaide Grand Prix, preventing him from repeating the heroics of 1989.