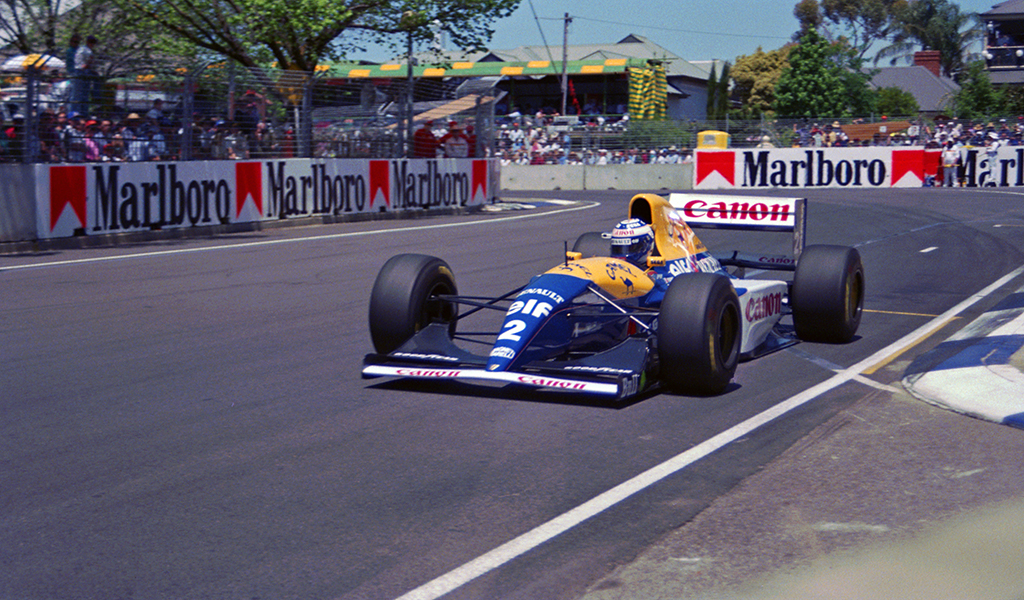 Frenchman Alain Prost won all four of his Formula 1 world championships during the Adelaide Grand Prix era. And Adelaide had a grandstand seat to the drama of those championship wins.

Prost arrived in Adelaide for the first time having already wrapped up the 1985 championship win, a long-awaited first title for a French driver and a relief for Prost having missed out on the 1983 and 1984 titles by a combined total of two-and-a-half points.

The 1986 season would be a tougher fight, though, as the Williams Honda moved ahead of the McLaren TAG/Porsche in terms of outright speed. Prost won just three races compared to the nine of Williams’ Nigel Mansell and Nelson Piquet heading into the championship decider in Adelaide, yet the astute Prost banked points as the Williams’ fought amongst themselves.

In the Adelaide showdown, Prost’s McLaren teammate Keke Rosberg set off as the hare to push the Williams’ at the front of the field, forcing a higher pace in a race where tyre wear would be critical.

Prost suffered a puncture early in the race though recovered and remained in the hunt for the win with the Williams’ once Rosberg retired with his own tyre failure. Piquet led from Prost with Mansell in a third place that would secure him the title, only for a spectacular tyre puncture to hit the Englishman on Brabham Straight.

Williams took the safe option and pitted Piquet for new tyres, handing Prost the race win and an unlikely championship success. His ability to judge situations and adjust his plan accordingly, as witnessed so dramatically over the course of 1986, is why he was called “The Professor.”

McLaren and Prost couldn’t keep pace with Williams in 1987, though Honda would shake up the established order by ditching Williams for McLaren from 1988. This meant Prost would be powered by the best engine in Formula 1 and be joined by rising star Ayrton Senna at McLaren.

Senna won out in the title battle in 1988 despite the fact that Prost ended the season with 105 points to Senna’s 94. Only the top 11 results were counted as per the rules, so Senna was champion with 90 points to Prost’s 87. Senna had at least won one more race than Prost to justify his first championship win in a season in which McLaren won 15 of 16 grands prix.

While Senna wrapped up the title in the penultimate grand prix in Japan, Prost dominated in Adelaide and won by a 36-second margin to become the first driver to win the Adelaide Grand Prix twice.

Senna and Prost returned to Adelaide in 1989 at war. Team orders were defied by Senna earlier in the season and the Brazilian needed to beat Prost in Japan to keep the title battle alive into Adelaide. But when Senna attempted to take the lead late in the race, Prost emphatically shut the door and contact ensued.

Prost retired on the spot but Senna continued, recovering to a win that wouldn’t last as he was disqualified for cutting the circuit on his re-entry. Prost, therefore, won the title as Senna pleaded his innocence.

The accusations and counter-accusations dominated the lead up the 1989 Adelaide Grand Prix. And the controversy continued when heavy rain hit Adelaide on race day. Prost, averse to racing in wet weather, led a driver protest against starting the grand prix, while Senna sat in his car determined to get going as he still held hope that an appeal would reinstate him as the winner in Japan.

Prost pulled in to retire after the opening lap declaring his life was more important than a race, while Senna’s charge came to an end when he slammed into the back of Martin Brundle’s Brabham while leading comfortably.

It was Prost’s turn to head to Adelaide feeling victimised. He refused to speak to the media, skipped the 500th grand prix celebrations and walked out of the drivers’ briefing, but nevertheless ended the season with a third place in the race.

Prost missed the next two events in Adelaide. He was sacked by Ferrari heading into the 1991 event for criticising the car, forcing him into a sabbatical in 1992.

He returned to Formula 1 with Williams in 1993, off the back of the team’s dominant championship win in 1992 and forcing the reigning champion Nigel Mansell to retreat to IndyCar.

Prost wrapped up the title with two races still remaining in Portugal, where he announced his retirement from Formula 1. Senna and Prost engaged in one final battle in Adelaide, with the Brazilian winning out and the Frenchman taking second place in his 199th and final grand prix.

The rivals embraced on the podium to bring to an end one of the most electrifying eras of Formula 1.